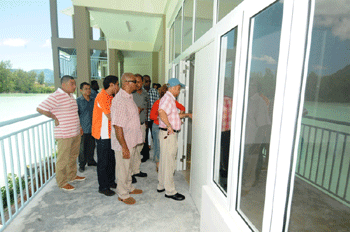 On Saturday morning when he went back to zone 18 at Providence where the centre has been built, the President expressed his satisfaction and said he was pleased to see the progress made on the building where young entrepreneurs will soon move in to start their businesses. 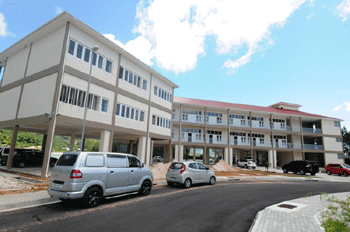 Speaking to the media, the Minister for Investment, Entrepreneurship Development and Business Innovation, Michael Benstrong, said the Seychelles government will subsidise the rental cost for the entrepreneurs who will also have a grace period of six months.

For example, an entrepreneur renting a 29m2 space will pay R4,500 monthly and the government will pay the remaining R2,125.

Construction of the 3,500m2 SME building has been financed by the social security funds which, according to provisions of a new law which will be passed soon, will be managed by the Pension Fund.

Minister Benstrong explained that businesses have been organised into different sections.
“What we have done at this centre is bring all the different types of jobs together in sections. For example, all entrepreneurs doing meat processing will be in one section as we need to get the right sewage system for them. This is important as an entrepreneur doing meat processing now cannot change its use to tailoring and still occupy the same space as the facilities in place will not cater for that. We will work very closely with the tenants so that they respect their engagement,” said Minister Benstrong.

He added that because there are still more potential businesses, the government has decided to build a similar centre at Ile du Port but the project is still in its initial stage.

“With little land available, such projects benefit a lot of people who only just have to move in and start their business. These working spaces are very affordable and there is big demand,” noted Minister Benstrong.

A Leve Debrouye sculpture will be placed in the compound of the building which is expected to be inaugurated later this year.