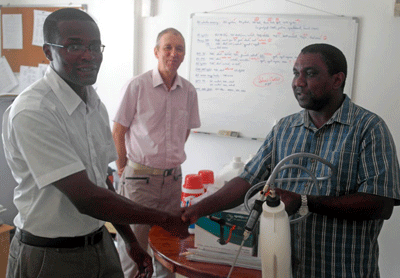 The Seychelles National Parks Authority (SNPA) has received a set of equipment to help control the outbreak of the crown-of-thorns starfish (Cots), which is currently affecting the north-west coast of Mahé.

The equipment was presented to the SNPA’s chief executive Flavien Joubert by the UNDP programme manager for Mauritius and Seychelles, Roland Alcindor, in a small handover ceremony held recently at the GOS-UNDP-GEF office at Les Palmes Building.

The equipment, which was designed for use on the Australian Great Barrier Reef, was purchased by the GOS-UNDP-GEF mainstreaming biosecurity project.

Eight underwater chemical injectors were provided, which can be used by divers to inject a toxic chemical directly into the starfish such that it dies on the spot – a lot easier than the previously used method of spearing them and bringing them to the surface for disposal in the landfill.

As the starfish have toxic spines that can injure humans, this method is also much safer.

Cots are large starfish – generally ranging between 25-35cm in diameter, though they can grow up to 80cm – with long poisonous spines. They feed exclusively on live coral. They occur naturally on reefs throughout the Indian and Pacific Oceans. However, under favourable conditions (which are not easy to define) the starfish populations can suddenly increase dramatically and cause widespread damage to coral reefs. 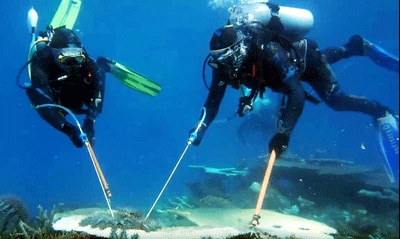 A severe Cots outbreak was recorded in early 2014 in the north-western coral reef areas of Mahé, especially in Beau Vallon bay. Surveys carried out in late 2014 by SNPA, local NGOs and dive operators, led by Cots expert Dr Udo Engelhardt, revealed that the starfish were spreading further along the western areas.

Based on the survey results, it was recommended by Dr Engelhard that urgent measures be implemented to tackle the Cots infestation, which otherwise would have severe implications for Seychelles’ coral reef biodiversity and for the small but important section of the tourism industry focusing on diving and snorkelling.

His recommendations included deploying the injection equipment as a quicker and more effective method for those involved in Cots eradication activities.

“The injector guns are a lot safer for divers, compared to the typical removal method of spiking the Cots, and will make the task easier for them. The new equipment will also help in speeding up the rate of eradication, and for the coral it gives a better chance of survival against the devouring Cots,” noted Mr Joubert at the handover ceremony.

The injection equipment is now being deployed by SNPA, NGOs and dive companies in the Glacis to Baie Ternay area, and will be available for use elsewhere if other outbreaks are reported.