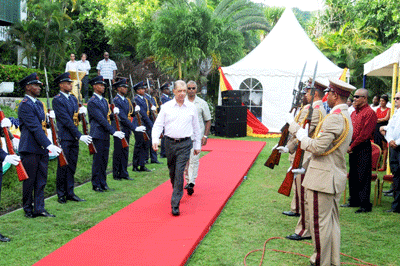 The first 100 days of President James Michel’s third and final five-year mandate have put to the test our determination and courage to accomplish what is better for our people, Vice-President Danny Faure told the National Assembly yesterday.

It is to be recalled that after he was sworn in as President following his victory in last December’s election, Mr Michel committed his government to deliver on different measures during the first 100 days of his mandate.

Now that the 100 days have elapsed, Vice-President Faure, in a statement to the National Assembly, outlined the actions taken or being taken in line with President Michel’s commitment as follows:

• A special court is to be set up to try and deal specifically with drug and drug-related cases;

• Laws will be amended accordingly to allow the Judiciary discretion to sentence anybody arrested in possession of drugs;

• Laws will be amended to allow for drug addicts to be treated and rehabilitated under medically supervised programmes.

Vice-President Faure informed Assembly members that during its session on March 23 the Cabinet of Ministers considered a modern and very comprehensive Bill which will establish the legal framework within which the above mentioned actions will be carried out.

The Misuse of Drugs Bill 2016 which was published in the Official Gazette of March 24, will soon be presented for National Assembly consideration and approval.

Other actions Vice-President Faure announced included a proposal to put in place a regional structure within the Indian Ocean Commission (IOC) for intelligence gathering, coordination and operation against organised drug trafficking networks.

“The proposal was taken up and discussed during the IOC’s 31st Foreign Affairs Ministers’ council meeting held on February 26 in La Réunion,” Vice-President Faure said.

On the audit of all ministries and departments, Vice-President Faure said this has been completed and action taken to address shortcomings will start as from next month.

On the question of payment of gratuity and compensation to former SPDF members, 710 such members have already been paid their gratuity while 98 cases which involve the heirs of those members are being reviewed before being processed for payment.

With regard to payment of compensation, Vice-President Faure said the SPDF is in the process of finalising the necessary documents in preparation to make the payments expected on April 18.

To date 196 out of 202 former Royal Fleet Auxiliary (RFA) servicemen have been paid their ex-gratia payment.

Vice-President Faure pointed out that in addition to the 202 ex-servicemen, there are other cases which have been registered for consideration by the Ministry responsible for Finance.

While increases in gratuity in the public service has already come into effect, ‘My First Job Scheme’ started at the end of February and already 18 companies in the private sector have been refunded for enrolling 71 young cadres under the programme.

Housing allowance for university graduates has increased from R3,000 to R4,000 monthly and the duration of payment has been extended from three to five years and these are in effect since January. As of March 28, 132 graduates are benefitting.

Allowance for Seychellois students in private post-secondary establishments has also come into effect.

Laptop scheme has since January this year been extended to S4 students and to date 92 students have seized the opportunity to obtain a laptop.

Free specialised medical care for Seychellois referred to Seychelles Hospital by private clinics has also come into effect and a lot of people are benefitting.

With regard to renewable energy democratisation scheme launched earlier this year, already PV panels have been installed on 15 homes.

Other actions taken include:

• 13th month salary for public sector employees has been completed;

• Home improvement loan scheme for pensioners which government is subsidizing at a 25% rate has been finalised and will be administered by the Housing Finance Company (HFC);

• Increase in pensioners’ pension will as from end of April increase from R3,600 to R5,050 in line with increase in the national minimum wage.

Vice-President Faure stressed that President Michel has kept his promise and the government, through its hard work has delivered on those commitments to better the lives of our people.

“The 100 days have put to the test our determination and courage to accomplish what is better for our people,” Vice-President Faure told the Assembly.

The leader of government business Marie-Antoinette Rose for instance wanted to know what the government is doing to ensure there are mechanisms in place for effective realisation of the different measures and programmes announced by the President so that when accessing them people are properly guided and not made to go round and round resulting in more frustration rather than the solution they are seeking.

Vice-President Faure said the government is concerned by the matter as public satisfaction is crucial in determining if a programme is effective.

He said a lot of work is being done to ensure that ministries, departments and agencies responsible to carry out the different programmes have in place the necessary mechanisms to guide, inform and educate the public on the programmes available to them and the easiest way to access them.

He called on all concerned to come up with effective public information and education campaigns.