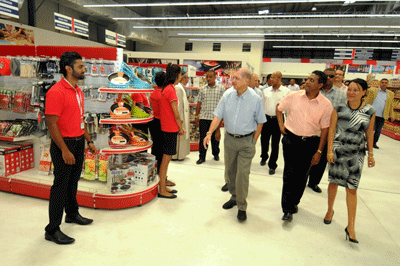 It had been the talk of the town or rather of all Seychelles since the project was announced late last year, and preparations going on on Bois de Rose Avenue for the past nine months had been an attracting sight for excited consumers.

And if as Seychellois we were used to refer to ‘supermarkets’ for our weekly or monthly shopping, we now have to get accustomed to the term ‘hypermarket’, as this is how the STC (Seychelles Trading Company) has decided to define the largest shopping outlet to date in the country.

The STC hypermarket opened its doors yesterday, offering a different shopping experience to customers, with  a variety of high quality products and services all under one roof and in one location.

It was Vice-President Danny Faure and STC’s chief executive Veronique Laporte who had the honour of unveiling the commemorative plaque to officially open the new facilities, in the presence of President James Michel and Jacquelin Dugasse, chief executive of Société Seychelloise d’Investissement (SSI) – the parastatal company which owns the property. 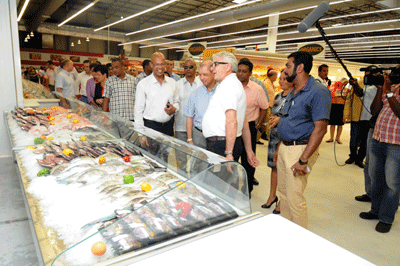 In his speech, Mr Faure traced the history of the place which he described as quite long and had started with a private public partnership, which however could not continue due to the private partner being victim of the global financial crisis.

He added that determined to have a convenient store, convenient place and convenient price for Seychellois consumers, the government decided to complete the project.

This, he said, is proof that the government wants to fuel the continued growth of the economy and to intervene when the private sector cannot complete certain projects.

Commenting on the presence of Seychellois businesses which the vice-president referred to as “upcoming small and medium-size enterprises” (SMEs) which are leasing space in the 7,000 square metre complex which has cost R160 million, he said this is a direct response to the government’s wish to provide space to SMEs and permit them to grow. 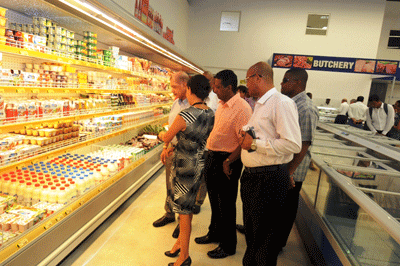 He concluded that the new STC hypermarket will revolutionise shopping habits and patterns in Seychelles, as it will offer new shopping experience and service.

He described the opening as a new beginning for the STC, company which he said many Seychellois look upon for quality products.

Describing the project as “a first for Seychelles”, Mr Dugasse has on his side wished to thank all those who have believed in the SSI group of companies and helped make it come to reality. These include the Seychelles government as a shareholder, Nouvobanq, Green Island Construction, SSI and STC staff as well as the tenants.

Apart from the hypermarket, the Bois de Rose shopping complex as the entire centre has been named comprises a mini shopping mall with over 15 commercial units offering a variety of products and services.  They include an eye centre, pharmacy, money changer, laundry, garden centre, hair and beauty salon, bank with ATM and night safe facilities, as well as sports, flower, garments’, pet and furniture shop. Customers can also pay their utility and telephone bills, or even buy a new mobile phone or starter pack from the Cable & Wireless or Airtel showroom. 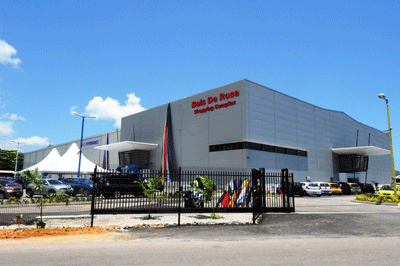 The complex will also have a ‘Healthy Living Café’ catering for snacks and pastries, and a cellar offering a wide selection of wines and other alcoholic beverages.  In the near future, it is expected to have a food court, a children’s play room as well as some other facilities.

The Bois de Rose shopping complex is ideally situated outside the city centre, permitting shoppers to avoid the busy Victoria traffic or losing time to find a parking space. It has a vast parking area which can cater for over 125 cars. If you do not want to get entangled in traffic jam or if you do not possess a vehicle, you still do not have to worry: The Seychelles Public Transport Corporation provides an hourly bus shuttle service to and from the Victoria Bus Terminal. In case your shopping bag is too heavy to carry, you can also take a cab back home from one of the complex’s taxi bays.

After receiving the blessing of Deacon Danny Elizabeth and Father Colin Underwood, respectively of the Anglican and Catholic churches, the STC hypermarket opened its doors to guests present, followed by the general public. As from today, it will be opened from 9am, offering late day shopping up to 8pm from Monday to Saturday. Contrary to most – if not all – other shopping centres which are closed in the afternoon of Sundays and public holidays, it will close at 5pm on those days.

The accompanying photos show guests touring the new hypermarket and a view of the Bois de Rose shopping complex which houses the STC hypermarket.