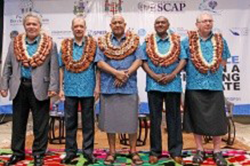 The 1st High-Level Pacific Blue Economy Conference (PBEC) under the theme ‘Sustainable Oceans in a Changing Climate’ organised by the Pacific Islands Development Forum took place at the Grand Pacific Hotel, Suva Fiji on the 23rd – 24th August 2017 in conjunction with the PIDF Biennial Conference. It was attended by the Prime Ministers of Fiji, Mr. Voreqe Bainimarama, and Tuvalu Mr., Enele Sopoaga, as well as the Minister of Foreign Affairs of the Solomon Islands Mr. Milner Tozaka and over 200 other participants.

At the conference, President Michel made a keynote address where he spoke about the importance of the Blue Economy for the economic development of Small Island Developing States.

“The point is that we cannot afford to wait for the big powers to determine our priorities.  We must continue to engage in international forums, and look for help where this is available, as these are global issues that affect us all – large and small states alike. We must consider ourselves not as small island states but as large ocean states when we consider the extent of our Exclusive Economic Zones.  But we must also be prepared to act now, to chart our own course as island nations.  The main thing, I believe, is that we should move ahead together, sharing knowledge and offering mutual support. “Said President. Michel

The main outcome of the conference, the Pacific Blue Economy Summary will serve as a blueprint for the Pacific Islands Development Forum Strategic Plan on the blue economy to be approved by Pacific Islands country leaders later this year. It will also be a collective contribution to the regional Sustainable Development Goal roadmap for SDG14 (Life under water), with special emphasis on target 14.7 to which the concept of the blue economy has been associated.

The Chief Executive Officer of The James Michel Foundation, Mr. Jacquelin Dugasse, made a presentation on the Seychelles debt for adaptation swap to the Pacific Blue Economy Conference. It was very well received and generated tremendous interest and requests from other Pacific Island countries to learn from the Seychelles experience.

Whilst at the conference the Foundation delegation also held bilateral meetings with the Pacific Island Development Forum, World Ocean Council, GEO Blue Planet which President Michel serves as member of its Advisory Board, to discuss avenues of cooperation and exchanges.

“The conference apart from allowing me to share blue economy developments in Seychelles also provided international visibility and exposure for the Foundation missions and programmes, said President Michel”.

2017-09-01
Georges
Previous: Upcoming UK comedy series to feature scenes in Seychelles
Next: Handing over of report on investigation in the fungus infestation at the National Cultural Centre