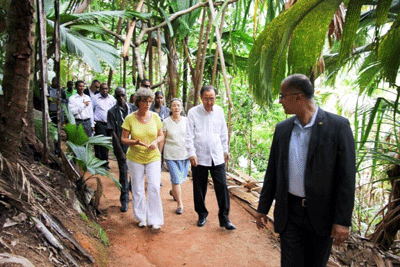 ‘Seychelles should preserve the treasure of nature’

“Seychelles should preserve the treasure of nature,” United Nations secretary-general Ban Ki-moon said when visiting the Vallée de Mai nature reserve on Praslin on Saturday afternoon, less than an hour after landing in Seychelles for the first time.

SIF chief executive Dr Frauke Fleischer-Dogley and the entire staff of the Vallée de Mai nature reserve welcomed Mr Ban to the reserve and escorted him on a short tour around the visitors’ centre and inside the forest as the black parrots – the enigmatic birds found only on Praslin – broke the silence of the valley with their piercing whistle.

As if seeing both the female and male coco-de-mer trees was not enough, the UN chief watched as security officer Andréa Radegonde de-husked a huge 12.44kg coco-de-mer nut, and he was quick to say as he holds it: “it weighs much lighter after being de-husked and it smells good.”

Before being served local fruit juice and chips, and before exchanging gifts with his hosts, Mr Ban signed in the visitors’ book placed at the entrance gate of the forest.

The Vallée de Mai nature reserve staff must be truly happy as they were able to have a souvenir photo with Mr Ban and they were not alone as some visitors to the site took the opportunity to photograph the South Korean statesman.

The country’s other heritage site is the Aldabra Atoll and the date of its inscription is December 17, 1982.

A place is inscribed by as a Unesco world heritage site by the world heritage committee for its outstanding universal value for a cultural or natural property which requires protection for the benefit of all humanity.