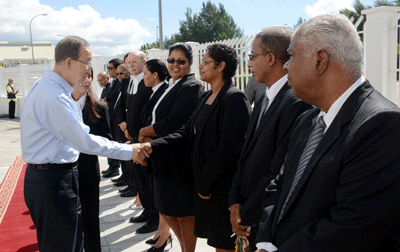 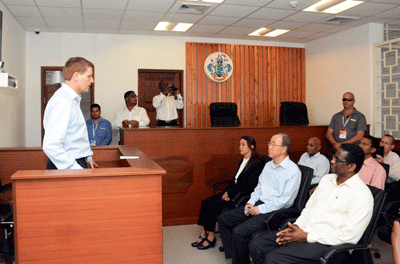 The head of the Transnational Organised Crime Programme, Regional Office for Eastern Africa and Head of Global Maritime Crime Programme, Alan Cole gave Mr Ban and his delegation a brief history of the Supreme Court Annex which open a year ago for piracy trials by the United Nations Office on Drugs and Crime (UNODC) in collaboration with United Kingdom, Netherlands and the Trust Fund on Piracy off the Coast of Somalia.

The facility is an extension of the Palais de Justice which houses the Supreme Court and Court of Appeal and it provides case management equipment, video link technology and legal research resources for the 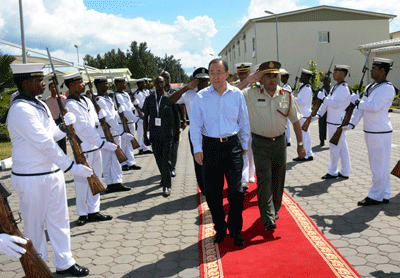 Mr Cole demonstrated the video link technology in Court 10 and gave accounts of the cases heard in this court since it was built.

Mr Ban said he has been on the phone with the presidents of Tanzania, Kenya and Seychelles discussing how to mobilise international solidarity and Seychelles is one of the very few countries which arrest, detain and prosecute pirates.

“A lot of countries reject or refuse to bring pirates in their countries and I really appreciate what you’ve done. The Seychelles government, from your strong commitment for the blue economy, since 2013, we 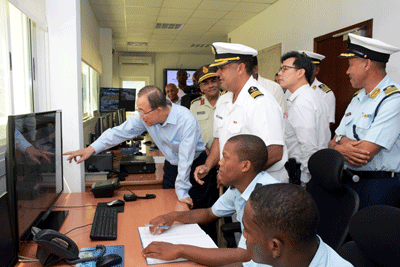 have not seen any case where shipping vessels have been hijacked,” he said.

He expressed his gratitude towards the countries which support and provide funds for such facilities. “These are very nice facilities, but facilities alone are not important. If we didn’t need these facilities, that would be ideal, however, life is not that way and reality is not that way. I am very glad that we are working very closely with the UNODC. There are a lot of other crimes such drug and human trafficking which we have to address. All these issues should be carried out in alignment and in the context of   sustainable development,” Mr Ban said. 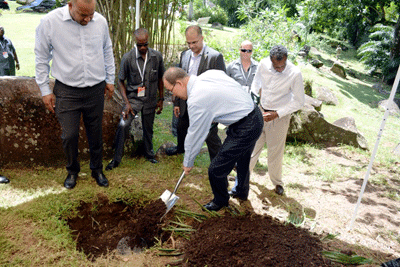 Mr Ban then proceeded to visit the Seychelles Coast Guard (SCG) base at Ile du Port.

The SCG operation officer Lt Col. Leslie Benoiton gave a brief overview of the base’s main objectives and how it functions.

He presented the most recent challenge being faced 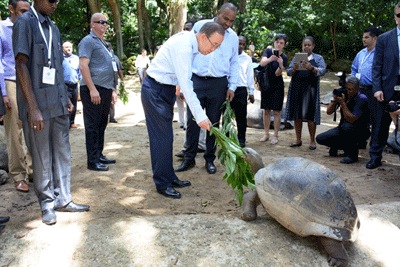 by the SCG where their facilities on Farquhar have been destroyed by cyclone Fantala.

While touring the operation centre, Mr Ban watched a brief demonstration of the coastal surveillance system.

Brigadier Payet presented Mr Ban with books on the Seychelles and its islands.

From the SCG, Mr Ban went to the Botanical Gardens accompanied by the Minister for Environment, Energy and Climate Change Didier Dogley.

There he met his wife Ban Soon-taek to plant a coco-de-mer nut. Then they listened to a short presentation on the coco-de-mer by Raymond Brioche the chief executive of the Botanical Gardens  before continuing their tour to the Aldabra Tortoise enclosure.

They fed and took souvenir photographs with the tortoises before enjoying local refreshments.

Also present during the ceremony were the principal secretary for Energy and Climate Change Wills Agricole and that for Environment Alain Decommarmond among other guests.