UP CLOSE … with John Rachel, airline pilot and farmer 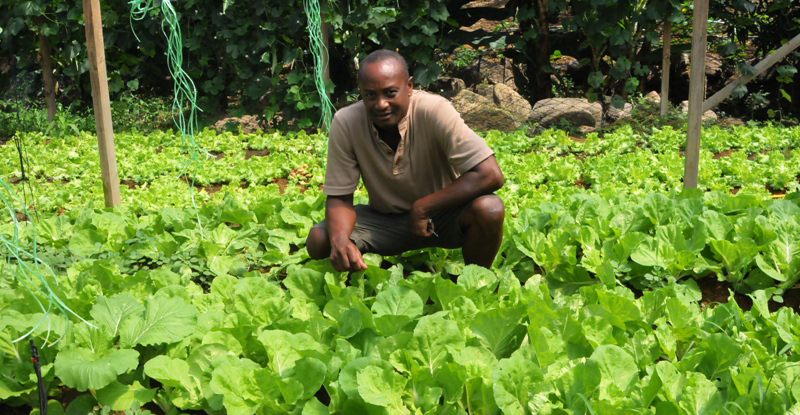 After spending over 20 years as a pilot with the national airline, John Rachel decided the time had come to focus on the other passion in his life which is farming.  This is why two years ago he left his job with Air Seychelles to take a less demanding one with Zil Air which leaves him enough time to dedicate to his much loved farming. Catching up with him on his farm at Béolière last week, Mr Rachel was eager to talk about his life’s journey of hard work to be successful.

While many people would probably find it hard to imagine a pilot wanting to turn to farming, for Mr Rachel, who has grown up in a family where the mother did domestic work including work on a farm and the father, besides his profession as a carpenter, kept a small backyard garden, it is therefore somehow normal to develop a passion for farming.

“I have always enjoyed farming because it has always been part of me and my family,” Mr Rachel explained as he led me on a tour of his farm.

“During the time I was growing up there was not much to do at home like nowadays and it was a means to keep young children away from mischief,” he said laughing, noting though that the interest remained and  gradually he found himself doing odd jobs on people’s farm to earn some pocket money.

If working the soil was in his blood then why did he build a career in the aviation industry?

“Becoming a pilot was among the trendiest careers in those days and I had this fascination for helicopters not planes at that time especially after Seychelles had been gifted two of them from India around the time I was about to complete my A-Levels,” he said.

“I was really curious to know how they function and this led me to seek holiday job attachments at the Air Force where I was even tempted to abandon the second year of my studies to start pilot training as the opportunity was there,” he recalled.

Now looking back at the long years he has been a pilot with the national airline and the two years with Zil Air, Mr Rachel expressed great satisfaction.

“I had a dream career and I worked hard to become what I wanted and I am happy, more so now that the amount of time I fly is much shorter with Zil Air and I can now concentrate on farming, something I have been into since a child.”

It was in 1985 that Mr Rachel joined the Seychelles Air Force in preparation for his pilot training which he followed for two years after which he joined Air Seychelles and started flying on the domestic routes.

Since then he has been employed with Zil Air which offered chartered flights.  Other than helicopter services the company also has two small planes and Mr Rachel is among the four pilots employed for the service.

“I worked hard, I made a lot of sacrifices and I fulfilled my dream. I’ve travelled the world but I feel I needed to slow down and do something less stressful,” he said.

Mr Rachel’s three brothers also practice agriculture and when one of them who owned a farm died several years ago, the remaining brothers teamed up to maintain continuity and today one of them is also still running the farm at Val d’Andorre.

Mr Rachel noted that he opted to have his own farm seven years later.

After another seven to eight years, he continued to do farming on a plot of private land at Anse à la Mouche and also around his home at Cascade.

He invested his savings in his own plot of farm land at Béolière in 2012 and took an EDF loan to  continue its development. Today looking at his achievements and what he has managed to accomplish, Mr Rachel is overjoyed.

‘I decided to protect my investments’

Mr Rachel said like always he is working hard and dedicating his time to protecting the investments he has made in the agricultural sector and ensuring he works to reap the maximum benefits.

Today he has stopped farming around his home but has turned the space into housing units for rent.

“Aviation was my dream but the nature of a career in that sector in my view has a limit and I do not have any regrets. In fact I cannot be happier especially knowing I have another passion to turn back to,” he said.

“I am now doing what deep down in my heart I never stopped longing for,” he explained.

“At my age I really felt the need to slow down a bit and reduce stress in my life,” said the 52-year-old father of four.

Selected recently to be part of the agri-business project here, Mr Rachel welcomed the new skills he has acquired after following different agri-business education sessions.

“There are lots of potential to develop agri-business and I believe with all the incentives on offer, if taken seriously agri-business can result in the expected yields to sustain those who launch in the sector,” he added.

Mr Rachel is gradually building his clientèle and presently among them are the STC (Seychelles Trading Company) and Four Seasons to which he supplies local fruits and vegetables on a weekly basis.

Demand for locally produced fresh fruit and vegetables continue to increase as people become more conscious of what they eat and Mr Rachel believes many local producers have to relook at the way they are producing and explore ways and means to increase local production.  Mr Rachel also has large patches of lettuce, Chinese cabbage, chillies, spinach and spices.

“In order to sustain workers’ salaries you need some short-term crops,” he pointed out.

With plans to boost production and expand his farm, Mr Rachel is looking to bring in more foreign help.

“This is the only way forward in order to boost production,” he pointed out.

Continuous pilfering of his produce has forced Mr Rachel to take some extreme measures – invest in all round fencing, security and alarm systems. When he started the place was like an open air supermarket but he admits that it has taken a lot of effort to curtail thefts.

In a sector which has been undergoing intense revamping of late, Mr Rachel is of the view that taken seriously and working with devotion on set targets and a clear plan, economic and health benefits are enormous in farming.

“One cannot expect to reap much benefit without hard work, investments, commitment and sacrifices in this sector,” he remarked while admitting that difficulties and challenges abound and one has to be strong and determined to make it work.

“Being among my plants is my preferred pastime,” said Mr Rachel who lives with his girlfriend and two-year-old daughter.

“But I have enough time to spend with family and friends and I am really content with my life,” he admitted.

Looking at the future Mr Rachel has great plans to continue to acquire as much new farming skills to boost his productions and help reduce import of fresh produce.

“With hard work we can satisfy local demand for fresh vegetables and some fruit,” he stressed.

2016-06-07
Georges
Previous: Seychelles’ Chief Justice leaves official residence after ‘hatred and violence’
Next: Through the mists of History …