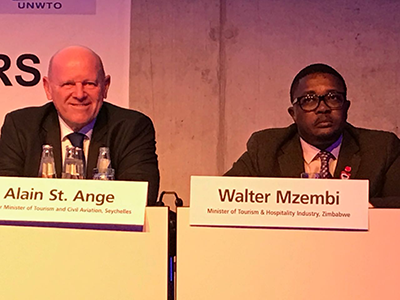 Walter Mzembi of Zimbabwe and Alain St.Ange of the Seychelles are both candidates for the position of Secretary General of the UNWTO and were both on the PATWA (Pacific Area Travel Writers Association) forum at ITB in Berlin.

The two Ministers were in Berlin to also make their case as to why they should be the next Secretary General of the UNWTO.

“It was pleasing to seethe two Candidate coming from the Africa Region sitting together” said a journalist who had been following the campaigning for the May Election of the UNWTO closely.