Seychelles Attorney General and Justice of Appeal sworn into office 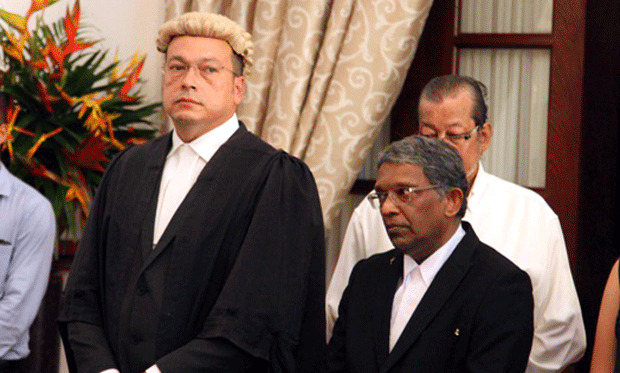 Mr. Ronny Govinden was sworn into office as the Attorney General of the Republic of Seychelles in a ceremony at State House this morning.

Mr. Govinden has served as the Attorney General for the past seven years and he has been unanimously recommended for re-appointment for another term of office by the Constitutional Appointments Authority.
Mr. Fernando was appointed asa non-citizen Justice of Appeal on the 1st January 2009. He became a citizen of Seychelles on the 22nd

July, 2011. Upon the recommendation of Constitutional Appointments Authority, he was appointed as a Seychellois Justice of Appeal.

2016-01-04
Georges
Previous: Tony Blair of the UK on a private holiday in the Seychelles
Next: ‘Remain united as a nation’ – A New Year’s message from Seychelles President James Michel