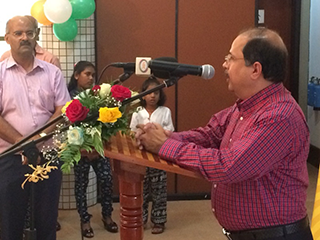 In 1770, the first French settlement was established on the island of Mahé. The party consisted of 15 white colonists, seven slaves and five Indians. The month of August is a very important month whereby we celebrate the lives of the first group of Indians to make it to the shores of Seychelles which had since then contributed immensely towards the socio-economic of the small island state of Seychelles.

To commemorate the 247th anniversary of the arrival of the first Indian settlers to Seychelles, a ceremony was organised at the National Library on August 27, 2017 .

Among guests present were the Speaker of the National Assembly Patrick Pillay; Minister for Youth, Sports and Culture Mitcy Larue; the Indian high commissioner to Seychelles Dr Ausaf Sayeed; leader of government business in the National Assembly Charles De Commarmond; principal secretary for culture Cecile Kalebi; the chairperson of the Indian Association of Seychelles Ramu Pillay; Mayor of Victoria David Andre; members of the Indian Association among other guests.

In his opening remarks Mr Pillay stated that the first Indian settlers arrived in Seychelles on August 17, 1770.

“As chairman of the Indian Association of Seychelles I have promised that, from this year on, we are going to celebrate this very important anniversary and make it part of our calendar of cultural events. It is very important to remember our connection to the Indian subcontinent and contributions that our Indian forefathers have made to our melting pot Seychellois nation,” he said, adding that the Indians have also contributed to the economy of Seychelles.

He further noted that the Indian Association will write a letter to the Ministry of Education to request that the history of the first Indian settlers be included in the history syllabus.

“This would help new generations to remember the importance of our first settlers,” he said.

Minister Larue pointed out that today is a historical day in the history of Seychelles. This day in 1770 has witnessed first French settlement in Seychelles. The first five Indian settlers who included Chary, Moutou, Menate, Corinthe and Domaigne, were among the first French-led party to arrive in Seychelles on August 17, 1770, followed by the first traders and others who came after, many of whom were businessmen. The Creole nation is today primarily made up of the descendants of five groups: French, British, African, Chinese and Indian settlers. Today we mark the anniversary of the arrival of the first five Indian settlers who set foot in Seychelles in 1770. Seychelles and India have achieved so much in the past years. In the future to come both country will still work together to showcase our melting pot of cultures,” she said. 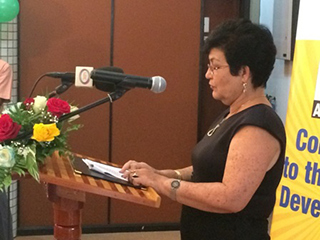 To celebrate the occasion an Indian Settlers Wall of History was erected in August 2015 which contains the names of several Indians who came to our shores to work with us. They came to work in plantations and later years saw arrival of traders and businessmen. Many socio economic projects today have been undertaken by Seychelles of Indian origin in partnership with government. Today they are operating in all fields as doctors, teachers, lawyers, etc .

High commissioner Sayeed mentioned that India would be ready to fund the Indology study chair in Seychelles.

He added that we would be very happy to fund a researcher at the University of Seychelles to set up an Indology department to study Indian history. It will comprise some researchers who can delve into the history of early settlements and bring out the contribution made by people of Indian origin right from 1779 till now. 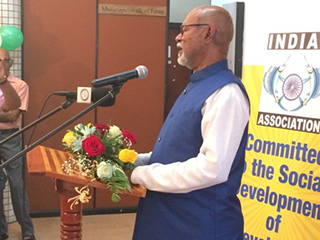 He thanked the Indian Diaspora for celebrating this important day here to make everyone remember this stay.

“We should embrace technology while remembering history,” he said, saluting Seychelles for embracing everyone from across the world with open arms.

On his part Speaker Pillay mentioned that he would be very happy to be associated with research projects which are focused on tracing our roots.

He added that it is a very good initiative by the Indian Association as it provides us to know how the Creole culture has developed with the contribution of various nationalities.

In 2015 a ‘Wall of History’ was unveiled at the Seychelles National Cultural Centre to recognise over 50 Seychellois of Indian origin who have made significant contributions to the history, culture and socio-economic development of Seychelles. The names of those individuals, all of whom have since passed away, are engraved on marble slabs.