A taste of Chinese cuisine at the Seychelles Tourism Academy 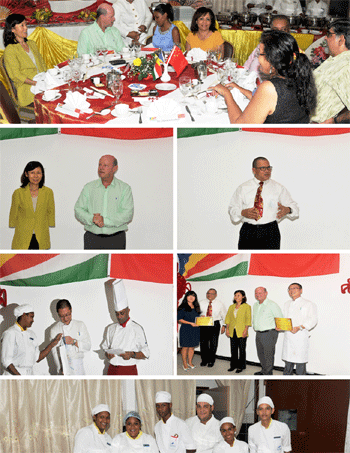 Chinese pride themselves on having one of the world’s unique cuisines full of aroma, taste, colour and look.

It is not every day that we get the chance to savour mouth-watering Chinese delicacies such as dumplings and the mutton stuffing soup or the sautéed eggplant with pork stuffing.

The Seychelles Tourism Academy and the Hebei Tourism Vocational College of China hosted a dinner earlier this week and it was a not-to-miss chance to enjoy these Chinese dishes.

The hall at the academy had been transformed into a well-decorated restaurant boasting a Chinese décor and with soft traditional music, adding to the ambiance and giving a taste of China.

Gracing the event with their presence were the Minister for Tourism and Culture Alain St.Ange, the Chinese ambassador Yin Lixian, the principal secretary for tourism Anne Lafortune, chairperson of the Seychelles Hospitality and Tourism Association Freddy Karkaria among other guests.

The dinner gave the second year students following the Food Preparation and Culinary Arts course as well as their lecturers the chance to showcase the skills learned from Chef Chang, a Chinese lecturer who joined the academy team in February this year.

Chef Chang’s mission in Seychelles is thanks to an agreement signed between the Hebei Tourism Vocational College and Seychelles Tourism Academy. The academy has welcomed more than 100 of Chinese students.

Speaking at the event, Minister St.Ange said it is an honour to see how the friendship between Seychelles and China keeps blossoming.

He added that the dinner event hosted shows the spirit of togetherness which exists between the two countries.

Minister St.Ange said the event also gives the private sector the chance to witness this cooperation which exists.

He thanked Chef Change for being in Seychelles and for sharing his knowledge and skills to our Seychellois students.

Minister St.Ange added that he hopes that the Chinese students in Seychelles will become good ambassadors for the islands. He also thanked the Chinese embassy for their support.

Ambassador Yin echoed that the Chinese students here are the ambassadors of the bond which exists between China and Seychelles.

On behalf of the food preparation and culinary arts students, the principal lecturer Richard Mathiot said a lot of skills have been acquired from Chef Chang.

Mr Joubert has described the dinner event as proof of the success of the agreement.

2015-06-22
Georges
Previous: Patrick Victor – Koste pep locéan Indien
Next: Tourism academy and association in Seychelles formalise bond through signed accord in what is an example in public / private sector partnership