Air Seychelles new Airbus A320 baptised Amirantes represents a sense of pride for the country, but most of all it gives pride to the people who work and run the airline, that is our own Seychellois pilots and crew.

This is what President James Michel told journalists when asked to give his impression about the acquisition on the aircraft.
“I congratu 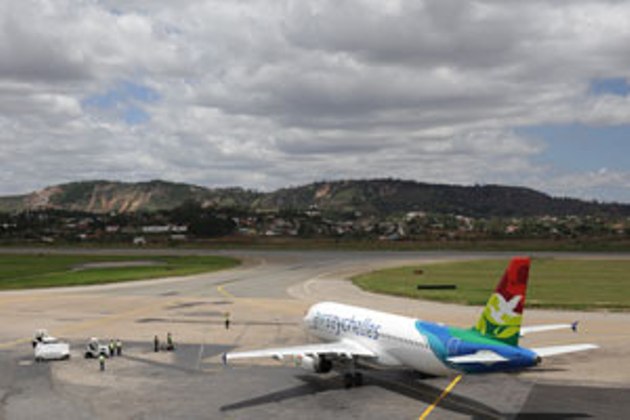 late them for making our airline a success and hope they will continue to keep it a success so that it continues to grow in the future,” said President Michel and he added that Air Seychelles is de facto becoming the Indian Ocean regional airline, flying to Madagascar, Mauritius, Tanzania, Mumbai and hopefully soon to the Comoros.
The new airbus A320 touched down at the Seychelles International Airport at Pointe Larue at 9.28am on Sunday November 30, 2014 and it was President Michel himself who had the honour of symbolically cutting the ribbon to officially welcome the aircraft on Seychelles soil and into the Air Seychelles fleet.
During the ceremony the chief executive of Air Seychelles, Manoj Papa, presented a model of the Airbus A320 to President Michel as a sign of appreciation for the government’s support to Air Seychelles.
Among the other guests were former President James Mancham, Vice-President Danny Faure, Minister for Home Affairs and Transport Joel Morgan, among others.
With the arrival of the new Airbus A320 Air Seychelles will be adding three new direct flights on its schedule that is Madagascar, India and Tanzania.
Mr Papa said the arrival of this airbus will allow Air Seychelles to offer significant network operations, bring in the flexibility and also allow the airline to provide its guests super results.
“We will have 18 flights per week and our partners Etihad Airways will also increase its flights which will make a total of 26 flights per week to Abu Dhabi.
The flight to Mauritius has been moved to a more convenient time, departing in the morning and arriving earlier in the evening.
Airbus A320 will travel to Mauritius at 9am return in the afternoon at 4.20pm on Mondays. On Tuesday it will leave for Tanzania at 9.30am and arriving in Seychelles at 7.05pm, leaving again at 8.45pm on the same day to Mumbai.
On Wednesday it will leave for Madagascar at 9.40am and arriving at 6.35pm.
Air Seychelles chief executive Papa said: “The  arrival  of ‘Amirantes’ is a truly special event for us that  marks  the beginning of an exciting new growth phase for our carrier. Our new Airbus A320 will be used to launch three new routes, including Mumbai, Dar es Salaam and Antananarivo, representing the fastest rate of expansion our airline has ever seen. We have been able to accomplish this incredible feat thanks also to the support of our equity partner, Etihad Airways.”
“In addition to these new services, ‘the delivery of Amirantes’ will allow us to offer significant schedule upgrades on our existing network. From December, we will increase our weekly services to Abu Dhabi from seven to nine flights, move our Mauritius services to a morning departure, and enhance our services to Johannesburg with a convenient Saturday departure.
“The extra flexibility and convenience offered by this schedule will attract more business and leisure traffic to Seychelles, and enhance our connections to powerful emerging tourism markets as well as established ones,” added Mr Papa.
As part of the Airbus family, the single-aisle A320 shares the same cockpit design and several operational commonalities as its wide-bodied variant, the A330-200, allowing Air Seychelles to realise significant cost savings by using the same award-winning cabin crew, pilots and engineers across both aircraft types. The aircraft has a two-cabin configuration comprising 16 seats in Business Class and 120 seats in Economy Class.
Minister Morgan, who is also the chairman of Air Seychelles, said: “Watching the A320 descend on Mahé with our bold livery on its tail fin was a proud moment for all of us. It is the third Airbus to join our fleet in as many years, and I am thrilled by the opportunities it brings for our national carrier, as well as for the wider economy and the people of Seychelles.”
The minister added that “it will connect our archipelago to important new markets in the Indian Ocean, East Africa and the Indian subcontinent, channeling new sources of trade and tourism through and beyond Seychelles, as well as improving regional air connectivity.”
Honouring the religious customs of the country, Amirantes was blessed during an interfaith service led by Deacon Louis Agathine of the Roman Catholic church and Anglican priest Danny Elizabeth. The blessing was followed by tours of the aircraft for the general public as well as tourism and trade partners.
Through its codeshare partnerships with Hong Kong Airlines, Etihad Airways, airberlin, Cathay Pacific Airways and South African Airways, Air Seychelles also offers an additional 42 codeshare network points.
Established in 1977, Air Seychelles adopted its present name in September 1978. Between 1978 and 2012 it was wholly owned by the Seychelles government but in 2012 the UAE’s Etihad Airways bought a 40% share in the airline, investing US $45 million in the airline.
In April this year, the company announced its second successive year of net profit, raking in a total of US $3 million, almost three times more than the US $1.1 million net profit recorded in 2012.
In November this year Air Seychelles picked up the awards for the Indian Ocean’s Leading Airline – Business Class’ and ‘Indian Ocean’s Leading Cabin Crew’ at the World Travel Awards in London.