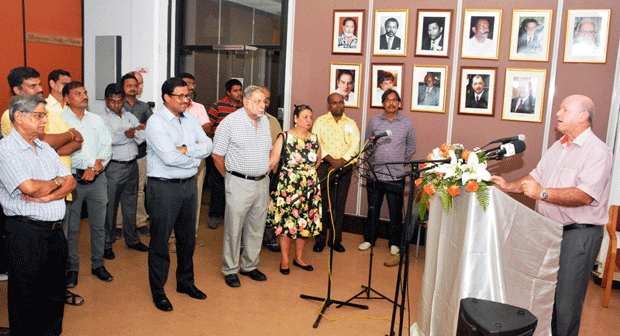 In 1770, the first French settlement was established on the island of Mahé. The party consisted of 15 white colonists, seven slaves and five Indians.

The month of August is a very important month whereby we celebrate the lives of the first group of Indians to make it to the shores of Seychelles which had since then contributed immensely towards the socio-economic of the small island state of Seychelles.

To commemorate the 246th anniversary of the arrival of the first Indian settlers to Seychelles, a ceremony was organised at the National Library yesterday morning.

Among guests present were the Minister for Tourism and Culture Alain St Ange, the principal secretary for culture Benjamine Rose, the Indian high commissioner to Seychelles Sanjay Panda and the chairperson of the Indian Association of Seychelles Ramu Pillay.

In his opening remarks Mr Pillay stated that the first Indian settlers arrived in Seychelles on August 17, 1770.

“As chairman of the Indian Association of Seychelles I have promised that, from this year on, we are going to celebrate this very important anniversary and make it part of our calendar of cultural events. It is very important to remember our connection to the Indian subcontinent and contributions that our Indian forefathers have made to our melting pot Seychellois nation,” he said, adding that the Indians have also contributed to the economy of Seychelles.

The first five settlers who included Chary, Moutou, Menate, Corinthe and Domaigne, were among the first French-led party to arrive in Seychelles on August 17, 1770, followed by the first traders and others who came after, many of whom were businessmen. The Creole nation is today primarily made up of the descendants of five groups: French, British, African, Chinese and Indian settlers.

Minister St Ange pointed out that Seychelles and India have been working in partnership for so many years.

“Today we mark the anniversary of the arrival of the first five Indian settlers who set foot in Seychelles in 1770. Seychelles and India have achieved so much in the past years. In the future to come both country will still work together to showcase our melting pot of cultures,” he said.

High commissioner Panda added that such initiative by the Indian association and the Ministry of Tourism and Culture will promote the history of the first Indian settlers in Seychelles.

Last year a ‘Wall of History’ was unveiled at the Seychelles National Cultural Centre to recognise over 50 Seychellois of Indian origin who have made significant contributions to the history, culture and socio-economic development of Seychelles. The names of those individuals, all of whom have since passed away, are engraved on marble slabs.