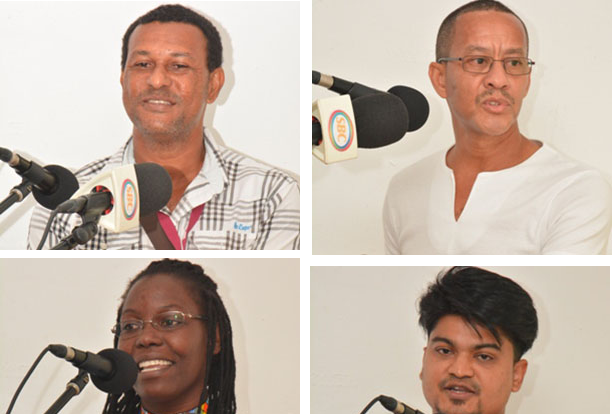 rt lovers and artists from Seychelles and abroad gathered again late on Thursday afternoon to  rejoice in and discover the different art works of four more artists taking part in the 7th Arts Biennale .

The small room at the Carrefour des Arts was packed for the fourth consecutive day this week as art lovers and artists came to see and appreciate the different PowerPoint presentations on the works of Seychellois artists Robert Alexis and Danny Sopha as well as those of Mulenga Mulenga from Zambia and Kavinash Thomoo from Mauritius.

With their passion and love for their art, for a little over an hour they took the audience on a surreal journey to their art world as excitement builds up to tomorrow’s official opening of the biennale.

Often very difficult to interpret, the different works nevertheless fascinated the audience as silence fell on the room while everyone present tried to understand and digest the different interpretations being given on what were being shown on the screen.

Alexis, well known for his abstract paintings and very interesting and often comic installation art pieces, said he discovered his great interest in different art forms at the tender age of 10 and he believes he owes that to the fact that there were artists from both sides of his family.

He said over the years he developed different techniques by experimenting with paint as well as different material which he found lying in the environment .

Alexis has done a large selection of different installation pieces as well as painting which have been sold and taken abroad, has taken part in different art projects and exhibitions both locally and abroad.

“I also do a lot of work transforming the coconut into an artifact. I like to create and I always create,” he said, noting that his works are displayed everywhere around the country – at the National Arts Council (NAC), at Maia hotel where he did a lot of restoration works.

Mulenga Mulenga is a female who studied art and design, has a degree in fine art, studied painting techniques and has been practicing abstract art since 2010 as well as promoting art in Zambia and doing some art projects with children using recycling objects.

“I’m very much interested in recycling and I have done a lot of work on recycling old fans,” she said.

Her country’s British colonial past having had a great impact on the political and cultural system  which she said has sort of disturbed the way she thinks as an individual when growing up.

“I was always asking myself who am I and right now I am not very good at writing my own mother tongue and this has been my drive to look at my identity,” she said.

Her abstract paintings illustrate a lot of that aspect as well as black beauty and other related themes.

“I want to promote blackness and originality,” she said. The colours black, white, red are very symbolic in my tradition and in my work to disseminate information,” she added.

Her work which also includes a lot of installation pieces, focuses on social issues like the widespread use of firewood in her country, aspects related to her childhood like hair styles, skin colour…

The audience was equally mesmerized by the work of Mauritian artist Kavinash Thomoo. The young man who has a degree and MA in fine art is intensely curious about human psychology and socio-political issues which has greatly influenced the largest part of his works and he is   among the few Mauritian artists who have experimented with digital art.  He has taken part in over 50 art exhibitions locally and abroad including biennale.

“I am very much interested in topics related to the environment and climate change issues,” he said, depicting some of his works on these topics.

Social and political issues also form part of his works and he has done a lot of installation pieces on these issues more remarkable was a piece on obsession with power among politicians and he used chairs to illustrate that. The different pieces he displayed varied from portraits, installations using recycled material and objects.

As for Danny Sopha, also a seasoned fine art artist, his paintings are focused on the cultural and natural heritage as well as the marine life and traditional music of Seychelles.

“Some of my painting are also focused on current affairs and global issues that goes beyond the borders of Seychelles,” Sopha said.

He also showed the audience a selections of ink sketches and drawing dating back many years. He has over the years taken part in a large number of exhibitions both locally and abroad and has also taken part in different art projects. He gave a detailed explanation of how he starts a sketch and the different steps leading to a full painting

The art works were very much appreciated by the audience.