Baie Lazare gets own museum-cum-souvenir shop and gallery 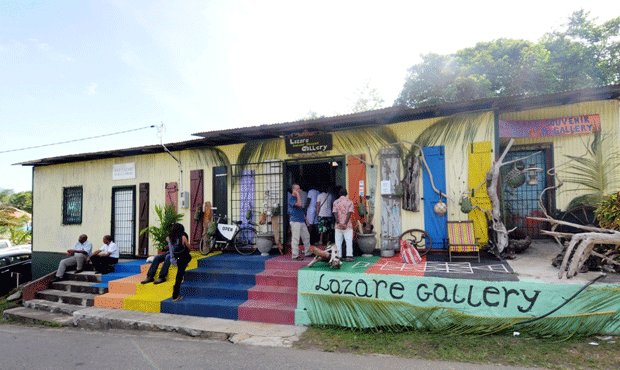 Artists, artisans of Baie Lazare now have a place to display and sell their work and visitors to our country and locals alike can visit to buy souvenirs as well as discover all the old treasures that this trove has stashed up.

This is now possible with the official opening of the Lazare Souvenir Museum Gallery.

The Minister for Tourism and Culture Alain St Ange officially opened the Souvenir Museum Gallery run by Joseph Larue and ideally situated on a strategic spot opposite the Baie Lazare police station.

The business became operational in January this year but was officially opened on Saturday afternoon.

Also present to support the initiative and witness this historic moment, were  Benjamine Rose, the principal secretary for culture, the district’s administrator Joyce Lepathy, fellow artists, artisans, staff from the national museums as well as friends, family members and other inhabitants of Baie Lazare. 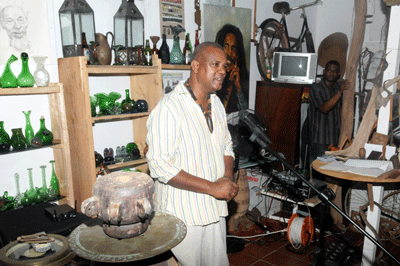 The corrugated and wooden building has for some 75 years been a popular landmark and meeting point in the district, housing a bar, a typical  Indian shop similar to many seen around the country but which for some years now are being replaced by more modern infrastructures.

But for one reason or another this particular shop has been closed for some time and this is when Mr Larue came up with the idea to make his dream of setting up a museum-cum-souvenir shop and gallery come true.

“Since the place closed down, the surrounding area was being used for all sorts of illegal and negative activities but we have transformed it into something positive,” Mr Larue said.

An artist himself and having been in the craft business for many years, Mr Larue a native of Baie Lazare who has a passion for old objects and artifacts of all forms — be it documents, photographs, utensils, furniture, tools to name but some —  added that he has always nurtured the dream of having a place to display all the items he has collected over the years.

When the opportunity to rent the old building presented itself he did not hesitate for one moment. 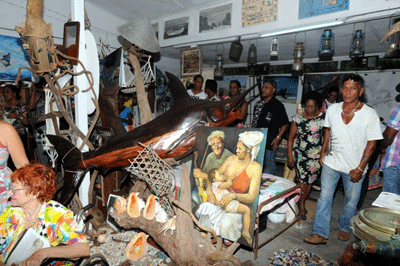 “I have a passion for old objects and I always want to preserve them and keep them for generations to come. I have been collecting these old objects for over 15 years now ,” Mr Larue said, adding that many of them he either received from people or he bought from them.

He said until now in his museum-cum-souvenir shop and gallery he has been receiving paintings from other artists from Baie Lazare but now he is also calling on artisans of the district and beyond to make the most of the opportunity to showcase and sell their work.

“We have numerous hotels and other tourism establishments at Baie Lazare as well as many artists and artisans so make the most of the opportunity to make yourselves known,” Mr Larue appealed.

Asked whether he has any plans to modernise the old building Mr Larue said this was not a good idea.

“The place is filled with visitors everyday and tourists enjoy this traditional Creole ambiance and setting and I want to preserve this as well but I have plans to extend as I get more items to display,” said Mr Larue.

Addressing guests before he officially declared Lazare  Souvenir Museum Gallery open, Minister St Ange congratulated Mr Larue for such a wonderful initiative to bring to the forefront all the treasures that Baie Lazare possesses.

He echoed Mr Larue’s appeal for all artists and artisans of the district to come together to make the museum an important  ‘must stop‘ point for all visitors to Baie Lazare.

“It is through this kind of initiative that our country which relies on the tourism industry will see further increase in its yield from the industry. If visitors stay in their hotel rooms as there is nothing to do and nothing to buy, we will never see any increase in our yield,” Minister St Ange stressed.

“Having looked around it is clear that you have a treasure trove waiting to be discovered by visitors and local enthusiasts alike,” Minister St Ange told Mr Larue.

He informed him that his ministry will do the necessary to ensure that the museum-cum-souvenir shop and gallery features on the list of ‘places to stop’ for visitors in our country as well as include it on its official website and other publications.

Alcide Libanotis, well known artist and a native of the district, also welcomed the initiative and believes that it has solved the problem artists and artisans have to showcase and sell their work.

Following the opening all the visitors and guests had a chance to view the different items and objects on display and these include a variety of old floral enamel kitchen utensils, typewriters, sewing machines, tools, water recipients, a traditional bedroom complete with bed and enamel chamber pot underneath and traditional nat vakwa for bedside mat, to name but some.

The museum-cum-souvenir shop and gallery is open from Tuesday to Saturday from 9am to 6pm.