Barclays donate to children and arts in Seychelles 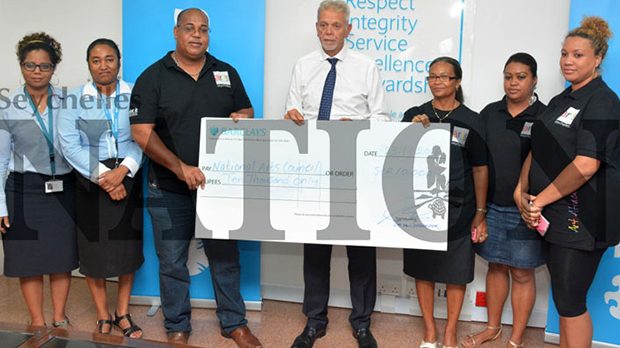 The National Council for Children (NCC) and the National Arts Council (Nac) were the two proud recipients of a cheque donated yesterday by Barclays Bank Seychelles.

The cheques were handed over by Johan Van Schalkwyk, managing director of Barclays Bank (Seychelles) Limited with NCC receiving an amount of R46,000 and Nac R10,000.

It was Jimmy Savy, chief executive of Nac and Ruby Pardiwalla, director of NCC, who accepted the cheques on behalf of their organisations in the presence of officials and staff of all three sectors. The donation forms part of Barclays Bank (Seychelles) various initiatives it undertakes to show support to the local community.

The ceremony was held in the bank’s boardroom in the Capital City building, Victoria.

Children, he said, are  facing all manner of abuse, the bad things they are being exposed to at a young age and the increasing number of single parents across the globe.

“Children is our future and unless we invest in our children, I don’t think we have a future,” he said.

Regarding culture, Mr Van Schalkwyk said he has always believed that culture is the DNA that holds a nation and keeps it together. An important component of culture has to be art. He urged Nac to continue the good work and to promote the art and the culture of our nation.

Mr Van Schalkwyk said Barclays Seychelles is not just here to make money though profit is also a very important component of its existence.

“We have learned as a bank, and I have learned in my career, that if the communities in which we operate as a business prosper, then the business prospers. The more the customers that support us the better the profit that we make, the more it gives us an opportunity to first and foremost look after our own colleagues that work for us well and secondly to make sure that we put something back into our community, hopefully by putting back into the worthy causes in the community is to enrich the lives of people,” he said.

He said this bank’s DNA is Seychellois and Barclays has been there for 57 years.

“It is important for us as brand to talk about the commercial side, make the money, but take some of that money and give back so we enrich lives through donations to organisations, enrich the lives of a broader society,” said the MD.

He said some of the money have been raised by Barclays staff who contributed voluntarily in community-based projects.

“It’s those small things that over time improve the lives of people and that Barclays has to play its role as a responsible corporate citizen and to demonstrate that from a brand point of view we also have a heart and a soul. And that organisations and people will resonate through those things as worthy causes and as causes that actually make a difference,” he said.

Mr Savy thanked Barclays and remarked culture is the root of the nation. He said the money will be put to good use and will also contribute towards the on-going art festival.

As for Ms Pardiwalla, she also was appreciative towards Barclays for thinking of the children and assured them the money will be put to good use.

She described it as a very noble investment and the donation will contribute in the organisation’s anti-violence campaign against children in Seychelles and against women and children.