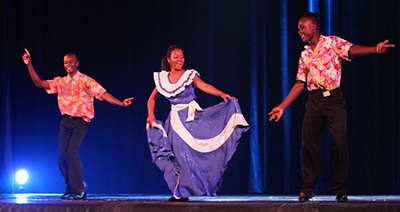 Bridging cultural gaps between traditional influences and the contemporary art form of dance as much as it bridged the various cultures of the dancers themselves who came from different Indian Ocean islands and countries as far as Korea and Australia was the theme that influenced this year’s ‘Biennale des Danses’ performances that took place on Saturday September 2 at ICCS. The result: an evening full of vibrant, intense performances of moves, colours and expressions.

Under the helmet of the Seychelles collaborators like the Ministry of Youth, Sports & Culture, National Conservatoire of Performing Arts (NCPA) and other related governmental institutions and of course the School of Dance, the ‘Biennale des Danses’ performance evening was the crown of a workshop that lasted 10 days. Each participating country had its own performance but the grand finale ‒ ‘Blue Salt Zephyr’ ‒ under the direction of Australian award-winning choreographer and dancer Scott Ewen was the highlight of the evening and the result of working with about 20 dancers, bringing all those different cultures together with, for many, newly acquired dance techniques.

Guirlande Dance Company, our own Seychelles dance troupe, under the choreography of Ruth Barbé and Joel Rose opened in dim light ‘Before/after each stroke of the oar’, an expressive performance that was based on the ‘coming and going’. How strangers meet and depart – the 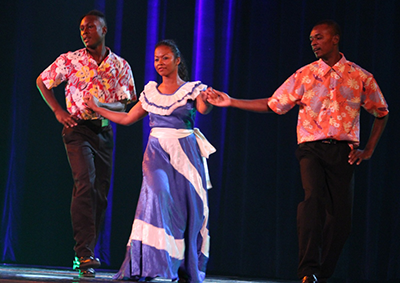 distance between encounters and good byes and all what could be (in the time) in between, lots of melancholic waving was incorporated between the encounters of the dancers, symbolising the goodbyes.

Madagascar’s ‘Akolita’, an intense fully contemporary art piece, showed to me that we need to take care of Mother Earth and our relations: we gaze ‒ a connection, should we abuse them, it will defeat us in the end. Choreographed by Olivia Randrianasolo, it emphasises the connections with intense body entanglement, very expressive where three bodies become one, the movements intensified with the light effects to the sounds of Funkadelic by Maggot Brain.

Korea’s Hana Dance Company performed a more traditional piece with tambourine and fans. It was amazing to see how light and swiftly those Asian feet glide over the dance floor. Almost hovering you hardly notice them stepping. The movement with the fans choreographed under the supervision of the Hana’s owner, Kim Mi-Suk, she had won many awards on National Dance festivals, notably the piece, an owe to the splendour of the royal court style, was performed to perfection. But we shall not forget to mention the precise movements of their male solo dancer, his dance was very intense and expressive at times the fan became more of a dagger. 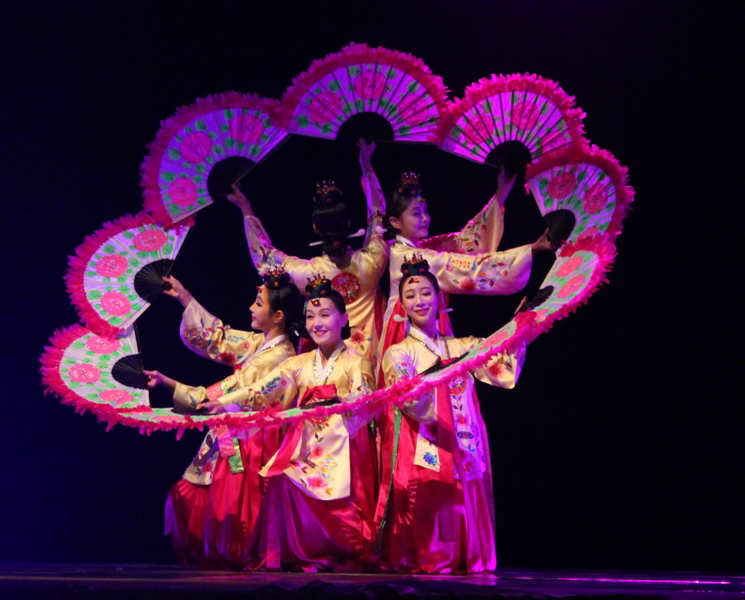 Next to the masterpiece ‘Blue Salt Zephyr’ that had been established during the workshop, the second highlight was definitely the performance of the Mauritian Les Frères Joseph Troupe. Built on ‘Disel’, the traditional salt harvesting which gives an insight to their heritage of underprivileged city of Mangalkhan. Their transition was complete: from traditional to contemporary. A masterpiece that showed tradition in the most unconventional way: with light effects, portraying a nearly black and white picture of the ICCS stage where ‘the workers’ work from one spot of light into another, to the most intense human pyramid encountered at the end of their dance, all rhythmic to a sound score of their own creation. It was simply a marvellous performance. Previously this act had also impressed the Francophonie festival at the Ivory Coast this year, where they won the first prize.

Rodrigues showed us first that they are with the time with their modern piece of dance and then resorting to a traditional ‘Kanmtole’ that differs in sound and speed to ours here in Seychelles; it was a warm felt lovely performance.

Grand finale: the ‘Blue Salt Zephyr’ a creation by Scott Ewen the guest choreographer from the Land Down Under. He has worked around the globe from Hawaii to Scandinavia and he brought worlds together here in Seychelles with an outstanding celebration of worlds connected, through movement. His quest was to bring the somewhat 20 dancers together, no matter their heritage and origin. Thus ‘Blue Salt Zephyr’, where the oceans and the skies connect us rather than separate us. In his synopsis, the worlds should not be divided, split and feared, rather the differences should bring us together, not rip us apart.

Following Ruth Barbé, dance instructor and choreographer, she told me about the intensity of this workshop and how it was to get connected with ‘Blue Salt Zephyr’.

“In only two weeks we worked out this performance, we managed to incorporate a harmonious balance to all the different levels of dance skills, improved techniques work with close body contact with members of different countries. It was an amazing two weeks, not always easy to bring together. Scott Ewen was an amazing choreographer!”

The evening ended with the Minister for Youth, Sports & Culture Mitcy Larue handing out gifts and certificates to the ever so happy dancers and choreographer who knew they delivered an unforgettable performance.