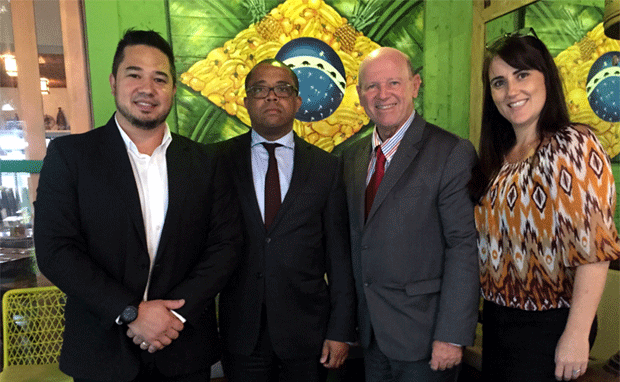 Alain St.Ange, the Seychelles Minister responsible for Tourism and Culture who is on a working visit in Sao Paolo in Brazil as he heads to Colombia for the 21st General Assembly of the UNWTO (United Nations World Tourism Organisation) met yesterday Wednesday the 9th September with Danniel Okamoto of Momo King Carnival of Brazil Organisation.

Also at the meeting were Stephane Perard, the Emirates Brazil Area Manager and Gisele Abrahao from the Head at the Seychelles Tourism Board’s Brazil Office.

The meeting was to seek the continued support from Brazil for the annual Carnaval of Carnaval that is staged in Seychelles in April and where Brazil is represented by a strong and colourful delegation. Brazil is also eager to see more support from airlines flying from Brazil to the mid-ocean paradise islands of the Seychelles and Emirates was approached to become the partner airline for the Brazilian Carnival Delegation.

“We shall continue to support the carnival in Seychelles and we want to work to see Brazil represented by a bigger delegation every year” said Danniel Okamoto as he sought the support of the island’s Minister St.Ange to find some twenty Seychellois to be trained by the Brazilian carnival choreographer to join their delegation during the next carnival in Seychelles. “Brazil would provide the carnival costumes to match that used by the Brazilians” said Danniel Okamoto.

Minister Alain St.Ange of the Seychelles expressed his appreciation for the support by Brazil and said that the carnival in Seychelles remains a unique event as it is the only carnival where all the best and most popular carnivals parade side by side followed by cultural troupes from the Community of Nations. “We wanted to stage an event that would help the world to unite and spread the key words of peace and security, words so needed in today’s troubled world. The carnival in Seychelles continues to rally more and more delegations annually at an event where religious beliefs, colour of the skin and political affiliations play no part” said Minister St.Ange.