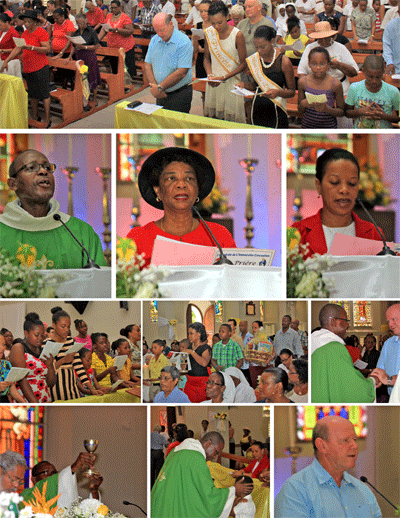 “Parents should not be ashamed to speak Creole with their children. We should eradicate the complexity inculcated in our children that Creole is an inferior language’’

This statement was echoed by Rev. Father David Alcindor in a special Creole mass organised at the Cathedral of the Immaculate Conception as part of 30th Anniversary of the Festival Keol in Seychelles.

In one of his most courageous and inspiring sermons, Father David Alcindor said culture is a nation’s greatest asset.

He said “we should not let our culture be overtaken by the modern technology ‘’.   He appealed to the faithful to allow them to be guided by the words of the bible and liberate themselves from the inferiority complex associated with the Creole Culture.

The Kreol mass at the Cathedral of the immaculate Conception in Victoria was full to capacity. The mass was also attended by Alain St.Ange, the Seychelles Minister for Tourism and Culture, Edith Alexander Minister for Labour and Human Resource Development, Benjamine Rose Principal Secretary for Culture and Debbie Horsman Miss Creole Des Iles 2015

When he addressed the faithfuls at the end of the mass, Minister St Ange said that the island’s Creole culture carried the Seychellois very own DNA. “Last year on this same occasion Rev. Father Alcindor spoke said that our Creole People resembled a beautiful bouquet of flowers, today the Rev Father spoke about the need for each and every Seychellois to be proud to be part of the Creole World. As I say happy Creole Day to each and every Seychellois, I must say that our religion is also part of of our culture. Our 30th Anniversary of our Festival Kreol is the celebration of our Culture and this is a celebration of our People. I say this because without our People we have no Culture” Minister St.Ange said.

The Minister announced that the 2016 Festival Kreol is set to become the biggest event on the country’s calendar of events as was announced by President James Michel when he opened the 30th Anniversary of the Seychelles Festival Kreol.

2015-11-11
Georges
Previous: Seychelles reflects on giving Festival Kreol a new soul
Next: ‘Let us be proud of our Creole identity’ says Seychelles Minister St.Ange in his message for International Creole Day 28th October