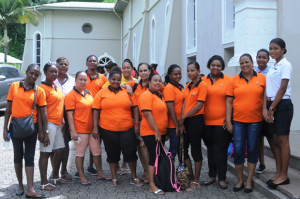 A group of 40 children of different ages yesterday discovered and learnt more of different historical sites, landmarks and other places of interest during a daylong bus tour around the country.

An initiative of the Seychelles National Youth Council (SNYC) as part of its Youth Support Services Holiday Programme, the tour was sponsored by Mason’s Travel which provided two buses and a guide to enlighten the children just like foreign visitors to our country.

A group of SNYC youth workers and President’s Village leaders accompanied the children on the trip.

“The aim is to help the children discover places of interest as well as famous historical landmarks around the country and what a better time than the school holidays,” said Beryl Dodin, a counselor at the SNYC.

The tour started at the tea factory at Morne Blanc soon after pick up from the village at 9am.

From the tea factory they went down to Mission Lodge and from there they made their way to Victoria via Sans Soucis with the next stop being at the Copolia Trail where the children admired the panoramic view of Victoria and Eden Island with its marina and beautiful houses.

Via Bel Air the group of excited and chattering children stopped at the old cemetery before reaching their next stop at the Cathedral of Immaculate Conception where they took a well deserved break before continuing to visit the museum. It was at the Cathedral that we caught up with the group and their leaders. Leaving the museum they made their way to the south of the island with the next stop at the Craft Village at Au Cap.

They had lunch at Anse Royale before continuing their tour to the Biodiversity Centre at Barbarons via Les Canelles. The tour ended at 3pm when the two buses took the weary but satisfied group back to the village.

Celisse Zelime, the guide for the tour, said it was just like taking a group of foreign visitors around the island, only that this time it was a group of children and their leaders.

“They all really enjoyed themselves, asked questions and they really had some great fun,” she said.

Ms Zelime, who received the help of two STA students, said every year Mason’s Travel sponsors different activities for children from different homes and these vary from lunches, boat trips and bus tours.

“The aim is to bring some more joy and excitement to the children and take them out of the confines of the village at least for a day to see and enjoy other parts of the country,” Ms Zelime said.

On behalf of the SNYC and the President’s Village staff and children Ms Dodin expressed heartfelt gratitude to Mason’s Travel for the great initiative which is always welcomed and appreciated by all.

2017-04-27
GeorgesK
Previous: Gerald Barbe i lans son 2enm albonm ‘Kapitenn Loulou’
Next: Artist profile – Jany de Letourdie: “Do as much good as you can…it will come back to you”