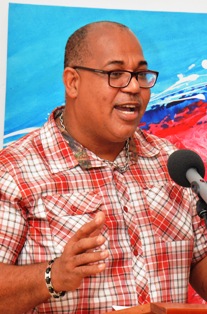 A group of young, talented individuals in cinematography have successfully re-launch Cine Sesel, which will promote local film production.

Locally made films are a vital reflection of ourselves and our society, it should be supported and promoted as an important cultural instrument to help understand all issues touching our lives today.

The National Arts Council (Nac) is supporting the initiative, which it says will bring together all forms of art.

The launch of the association took place on Friday evening at the Carrefour des Arts in the presence of Nac’s chief executive (CEO) Nac Jimmy Savy, the chairperson of Cine Sesel Alain Boniface, artists, along with other guests.

Chairperson Boniface stated that such association will bring together people with an interest in cinematography.

“Back in the year 2008, there was a local film festival called Cine Sesel, the name was then used for an association which has not been active since 2010. Our goal is to create a movie industry in Seychelles, along by bringing new ideas to create local movies. We are regrouping and revamping the love of filmmaking in Seychelles, especially among young people,” he said.

Mr Savy added that Cine Sesel needs to make an impact, so that our movies can make it abroad.

“I will give all my support to make sure that we produce good quality local movies. We currently are producing some movies and even small series, but the real aspect of the film making industry has not really been developed, even though we have amazing talents. Through a movie we have different kinds of art that come together such as acting, music, costumes and props,” he said.

Currently we have a few local movies that have become well-known, with good quality acting such as Menas, Senaryo Alternativ, En Dezyenm Sans and Mon Retour.

One of the main actors in Menas Colvin Beaudouin stated that for him acting has become a gateway to helping young people understand more about the importance of life.

“I started acting at a very young age; a few years ago I was approached by a group of friends to act in the Menas series. I have received some good feedbac. It is important to add that a movie tells a story, has got a moral behind it, and the audience can connect with the actors,” he said.