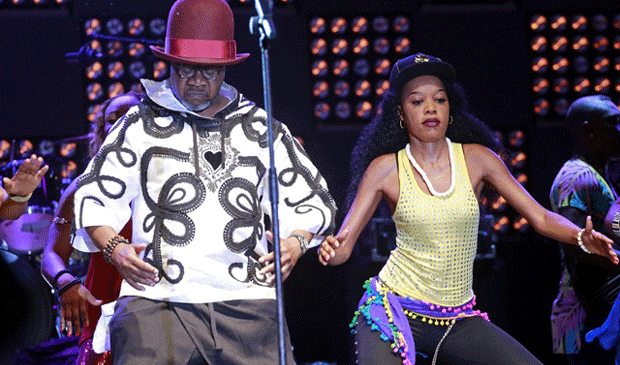 Papa Wemba, one of Africa‘s greatest music stars, died Sunday after collapsing on stage during a festival in Ivory Coast.

The Congolese world music legend, renowned as the “king of Congolese rumba” for the fusion of Cuban and electronic rock that he pioneered in the 1970s, was 66.

He died after falling ill during a set at the Urban Musical Festival Anoumabo (FEMUA) in Abidjan, the first major cultural event in the country since a jihadist attack on a beach resort last month.

Video footage broadcast live on television showed the dramatic moment that Papa Wemba — wearing a bold black and white patterned tunic and oversized bowler hat — slumped to the floor behind a group of dancers, before performers rushed to his aid.

FEMUA organisers expressed “deep sorrow” at the death of a man who has been at the forefront of African music for more than four decades.

“Papa Wemba wanted to die on stage, that’s what he told me two weeks ago when I spoke to him on the phone,” festival promoter and singer Salif Traore, known as A’Salfo, told AFP.

A’Salfo, lead singer with the Ivorian group Magic System, said he understood Papa Wemba died on the way to hospital and that a journalist who interviewed him earlier in the day had noticed that he appeared unwell.

The journalist “told me that Papa Wemba was showing signs of fatigue. He was drinking water between every sentence”, he said.

The festival was held just over a month after the Islamist attack on the beach resort of Grand-Bassam on March 13 that left 19 people dead.

Papa Wemba was born Jules Shungu Wembadio Pene Kikumba in June 1949 in what was then Belgian Congo, now the Democratic Republic of Congo.

He won international acclaim when the fashion for African and world music took hold in Europe and the United States in the 1980s, and recorded with British rock star Peter Gabriel.

“He was an icon, an artist of talent… it’s a great loss for music,” DR Congo Culture Minister Banza Mukalay told AFP.

He added that the singer’s body would be brought back to his homeland.

“We are not going to let him rest their for eternity. He will be buried here in the DRC.”

A father-of-six, Papa Wemba was also known as the driving spirit behind a cult movement known as “Sapeurs” whose members — young men — spend huge amounts of money on designer clothes.

He was also convicted in France in 2004 for smuggling illegal immigrants into the country.

Papa Wemba had begun his singing career in religious choirs in which he developed his trademark high range voice, making his debut in the capital Kinshasa at the end of the 1960s.

He inherited his love of song from his mother, who was a professional “wailing woman” at funerals.

Like many of his generation, he was strongly influenced by American and British pop culture and initially took the stage name Jules Presley.

In 1969 he helped found Zaiko Langa Langa, a Zaire-based pop group that was to achieve cult status in the 1970s with its revival of Latin American rumba.

The group revitalised the style that had been popular in the 1940s, using a combination of Afro-Cuban rhythm and Congolese song while introducing rock rhythms and electronic sounds.

Papa Wemba settled in France in 1986 as his fame began to reach as far afield as Japan, dazzled by the African dandy who was dressed by the world’s leading designers.

He went on to reach a much wider public thanks to a world music album produced by France’s Martin Meissonnier in 1988, which blended African and Western sounds.

But he remained immensely popular in Africa, taking part in major music events including a concert in London for Nelson Mandela’s 90th birthday.

He was convicted by a Paris court in 2004 of smuggling illegal immigrants into France by disguising them as members of his entourage, but walked free as he had already served four months behind bars.