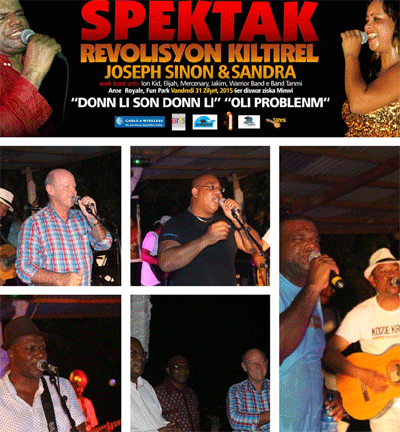 Culture is finding itself again in the mid-ocean islands of the Seychelles, so much so that the musicians and artists have called it simply a cultural revolution has started.

These words were first echoed about a year ago by Jean Marc Volcy, the veteran and very popular Seychelles Artist and it has since been repeated by most of the greats from the music world of Seychelles. The artists and musicians speak openly about this cultural revolution and they spell it out at every musical show they now organise giving credit at every occasion to Alain St.Ange, the Seychelles Minister responsible for Tourism and Culture who they say has stood by them to open the doors that is today giving them recognition and more respect than they have ever commanded in the islands.

Last week a musical show at Anse Royale on Mahe was simply called the “Cultural Revolution Show” and thousands descended on Anse Royale for this musical extravaganza that saw most of the most popular artists get on stage one after the other to the shout and screams of everyone. The revival of the popular open air concerts has seen many artists go around the country entertaining both the Seychellois and visitors by their thousands.

At the Anse Royale ‘Cultural Revolution Show” Minister Alain St.Ange was also again present to show support to the performing artists of Seychelles and he was being accompanied by the visiting Ministers from KwaZulu Natal of South Africa and from the Kingdom of Swaziland who both said that the ambiance was electrifying and both went on stage with their Seychelles counterpart and were acknowledged by Patrick Victor when he started playing some of his longtime favourites. Also present was Jimmy Savy, the CEO of the National Arts Council (NAC) of the Ministry of Tourism and Culture who joined Minister St.Ange to address the thousands of revellers present.

When Patrick Victor called on Minister St.Ange to address the crowd he said that if the music of Seychelles was today enjoying the popularity it was because Minister St.Ange was standing with the musicians and artists. As the crowd applauded Minister Alain St.Ange said that today the Seychellois were enjoying listening to the rhythms that makes every son and daughter of Seychelles proud. “We are all here in great numbers because we are proud of our heritage and in so doing of our music” the Minister said as he appealed for everyone to stand united together with him and the Ministry of Tourism and Culture to continue to defend the island’s culture and to encourage the continued development of music in Seychelles. Minister St.Ange thanked Joseph Sinon and Sandra Esparon for calling all the long list of artists together to perform as one. “This is the way forward and together we shall deliver more for our islands” Minister St.Ange said as he proposed that 2015 would be the year to revoke the law that banned the tapping of drums in Victoria, the old law that was enacted by the British Government when Seychelles was still a colony. This law stopped the moutya drums from echoing in the Capital of the Seychelles as it was feared that the Seychellois were passing coded messages using these drums.

The next open air concert is expected to take place on La Digue Island on the 14th August to coincide with that island’s 15 August Religious Feast.