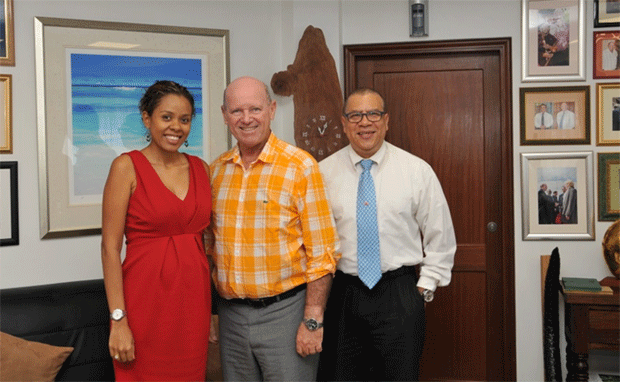 Our tourism industry has blossomed over the years, and thanks to dedicated individuals, it has grown to become the pillar of the Seychelles’ economy.

The country’s tourism trade sector has seen that there is a need to not just always echo words of thanks to these individuals who have made a mark on the island’s tourism industry, but to honour and recognise them as they have left footprints in this industry.

The call to honour people who have made their mark in our tourism industry comes from the tourism trade private sector.

During his door-to-door visits to tourism establishments on Praslin, Silhouette, Fregate which is now also being done on Mahe, Alain St.Ange, the Seychelles Minister responsible for Tourism and Culture took time to listen to those working in the tourism sector and one of the points that came up was the

recognition of people who have been here since the start of tourism in Seychelles.

Supporting this idea that has also since been taken up by some members of the press who were in Seychelles during the carnival, Minister St Ange said a committee will be set up to work on this project.

There will be a place dedicated to these individuals as requested by the tourism trade and during the upcoming tourism week in September, it will be officially inaugurated.

Members of the public are being urged to come forward to nominate individuals who they think have made their mark in the tourism sector of Seychelles since the start.

“Logos and names of the companies, hotels or other places in the tourism sector where these individuals have worked must also be given to ensure that the place becomes a ‘story board’ by itself” said Minister St.Ange in the presence of Sherin Naiken of the Tourism Board and Flavien Joubert of the Tourism Academy.

“The history of our tourism industry is a rich one, and so it is vital for the future generations to know about it. This will also help everyone to value the work done by those who have contributed in enriching our history. Through this new initiative, the whole nation will be brought close to our tourism industry and recognise its vitality” said the Minister.

The Ministry of Tourism and Culture already recognized Artists through a Wall of Fame where they are invited to unveil their own ‘Star’. The Ministry also has a Walk of Fame at the Department of Culture in the National Cultural Centre displays a collection of photos of musical bands and artists. At the Creole Institute a bust of Antoine Abel was unveiled last year in the presence of President James Michel to mark those personalities who had played a key part in the developing of the Creole language