‘Echoes from the Oasis’ preserving Seychelles’ past in novel form 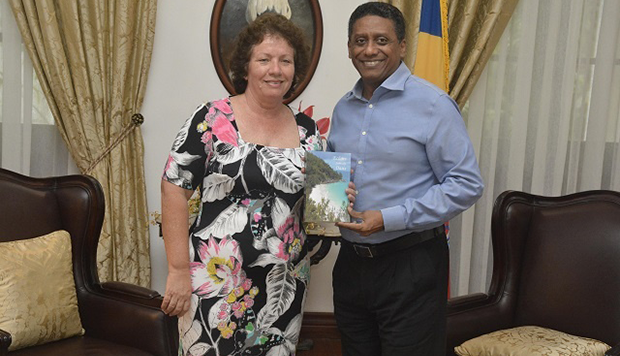 Seychellois author Rosie Tirant-Longhurst presented her first novel to Seychelles’ President Danny Faure recently and shared with him the concept of her new project.

Faure met with Tirant-Longhurst at State House at the end of February and commended the author for her contribution in preserving the Seychellois heritage and culture through literature.

“Each generation has a legacy, and each generation also gives it to the next one. The work that you are doing is educating our young people through your writing and sharing the story of our past and we are very grateful for that,” said Faure.

The book entitled ‘Echoes from the Oasis’ is a deep story with some very sad parts, said Tirant-Longhurst. It is part of the ‘Echoes’ series and can be purchased at Antigone bookshop in Victoria House Arcade at $16.7 (225 Seychelles Rupees) or at www.amazon.com

The scene of the novel is set in Seychelles in 1912, when the island nation was a strict Catholic community. It tells the story of 16-year-old Anna Savy, a Seychellois girl aspiring to become a nurse, who got pregnant out of wedlock.

“At the time, being a single mum was a difficult situation to be in. I wanted to show what it was like for women who had a child outside of marriage,” said Tirant-Longhurst.

Through her book, the author explained that she wrote about the past to preserve the Seychellois custom and culture of yesteryear for generations to come. She added that each book in the series, will concentrate on a product that was in high demand at the time.

“In the first book there is a family that has a vanilla plantation and through the book I am passing on how vanilla was cultivated, collected and processed,” said Tirant-Longhurst.

Before writing, Tirant-Longhurst does extensive researches about the time to capture the historical scenes and customs accurately.

Tirant-Longhurst left Seychelles, an archipelago in the western Indian Ocean, for England in 1995. The inspiration to write about the past came after she noticed how things had changed in her country during her absence.

The author is currently working on the second book in the series — ‘Under stormy skies’.

The second book will be about the continuation of Anna’s life, where she will give birth to her child and face life as a single mother. Tirant-Longhurst is expecting to finish working on the second book and have it published early next year.