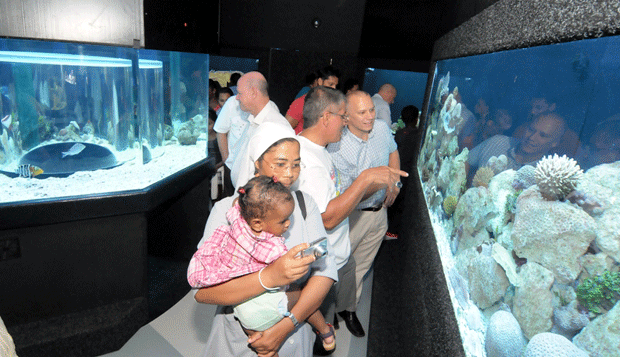 Those interested in discovering the underwater world can do so through a brand new aquarium at Eden Island.

The Eden Aquarium has about 33 display tanks holding some 18,000 litres of water. They have all been designed, constructed and set up by Charles Savy and his team for the past three years. All the creatures found in these tanks are sea water exclusively from Seychelles.

The first visitors were some 70 children from the President’s Village, Foyer de Nazareth and St Elizabeth convent along with their supervisors and other distinguished guests.

The children were really excited to visit the aquarium and learn about the precious animals, fishes and sea life that exist beneath our waves. 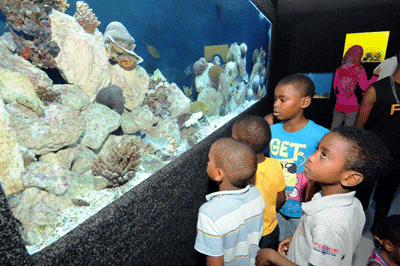 During the opening ceremony, David Savy, the brother of the aquarium owner, said his brother has a great love for the sea as he has been diving and snorkeling in Seychelles for nearly 40 years.

“Charles is a dedicated environmentalist especially when it comes to protecting our ocean and the life within it. I know for sure that he dedicates Eden Aquarium to the youth of Seychelles in the sincere hope that they will come to value and appreciate just how important it is to protect and look after these precious resources,” he said.

Charles Savy said his aquarium although smaller compared to those in other countries, is also unlike most aquariums as it showcases “rarer and lesser known fishes.”

In his address, Finance, Trade and the Blue Economy Minister Jean-Paul Adam stressed that this initiative demonstrates the vast potentials that exist in valorising our ocean heritage and that the emerging concept of the Blue Economy as a mechanism to realise sustainable growth based on an ocean-economy has been acknowledged. 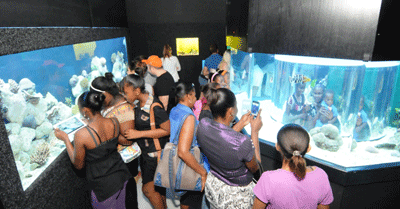 “This allows many of us to delve under the waves and explore the wonders of the oceans. I hope that this aquarium will encourage the young to embark in marine-related careers such as marine biologists, scientists, researchers, maritime legal officers and the list goes on,” he said.

For his part Tourism and Culture Minister Alain St Ange said this new facility is a way to increase the yield that we receive for tourism and added: “This is one new facility for our tourists to be able to enjoy. It is amazing how small the percentage of tourist who go diving in Seychelles, but now they can see what is found under those seas of Seychelles. It will be a way for them to remember our country.”

The aquarium will be officially open to the public as from today (Saturday) and under normal operations it will open from 6am to 6pm. For now only yearly tickets are being sold at R230.
The accompanying photos show guests touring the new attraction after its official opening.