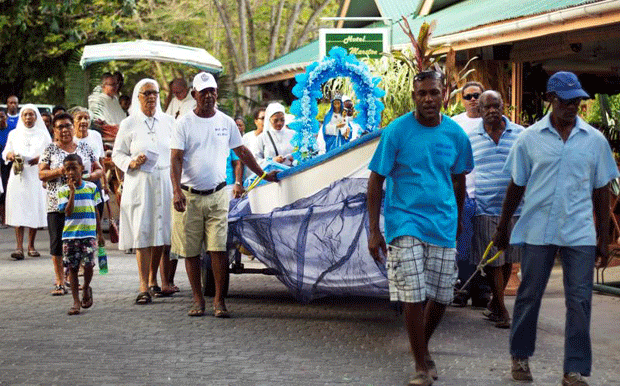 Once again, hundreds of Roman Catholics and other visitors from all over Mahé and Praslin braved the rough seas to join the Diguois in celebrating the Feast of the Assumption of the Virgin Mary on August 15.

Those who were fortunate enough not having to work on Friday, started making the trip in the morning with the main crowd arriving after 6pm and during the morning and afternoon of Saturday.

The celebrations started on Friday with a flotilla (parade of boats) at 4pm, which later made its way on land from La Passe to Saint Mary’s Church.

As is the tradition, the August 15 religious procession, the highlight of the celebrations, started at the grotto and headed down to the Church for mass, celebrated by the Roman Catholic Bishop Denis Wiehe and the parish priest and attended by many believers and visitors.

After the religious celebrations, mostly everyone headed down to La Passe and Anse Kalis where different activities were taking place to entertain the public. The big crowd had the choice to buy a variety of food and drinks, clothes, toys and souvenirs or take part in traditional games such as hoopla or lucky dips. 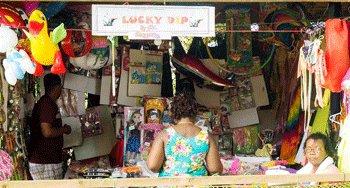 On the weekend’s agenda were also various shows by artists from all over the islands. They included Mercenary, Elijah, Jakim, Regi and Joseph Sinon, to name a few.

The activities for this year’s event were organised by the island’s celebrations committee in collaboration with the Ministry of Tourism and Culture and the Seychelles Tourism Board.

Also present for the event was the Minister for Tourism and Culture Alain St Ange, accompanied by his principal secretaries for culture and tourism Benjamine Rose and Anne Lafortune respectively.

Speaking on SBC’s airwaves live from La Digue, Minister St Ange said Seychelles was proud of its culture and that the La Digue celebrations demonstrated that our religious beliefs were part and parcel of the island’s culture.

Minister St Ange congratulated the Seychellois people for having great respect for their culture which he said was getting stronger day by day.