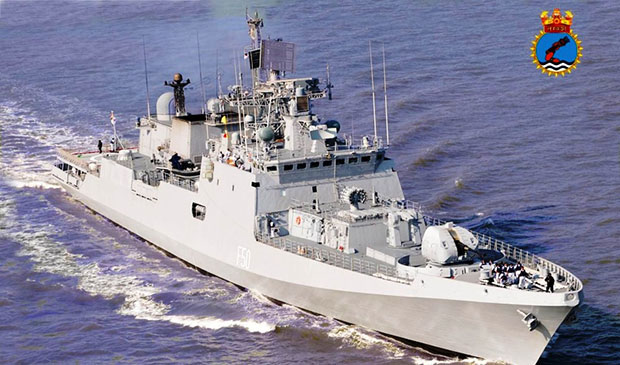 As part of celebrations this year, a 24-man marching contingent and the internationally acclaimed Indian naval band embarked onboard the warship, will take part in the Laserenad Enternasyonal de Victoriaon October 28, 2017.

During their stay in Port Victoria, the commanding officer and his ship’s staff will hold interactions with various authorities from the government of Seychelles and the Seychelles People’s Defence Forces. The ship’s officers and crew will also take part in sporting, cultural and charitable activities during their stay in Seychelles.

INS Tarkash (F50) belongs to the Talwar class of guided missile frigates and is based in Mumbai, India. She was built at the Yantar shipyard in Kaliningrad, Russia and was commissioned into the Indian Navy on November 9, 2012. The warship has a displacement of 4,035 tonnes with a maximum speed of 30 knots. INS Tarkash is capable of accomplishing a wide variety of missions, primarily anti-submarine warfare and anti-ship warfare.

The frigate can also effectively undertake ocean surveillance, monitoring of sea lines of communications/offshore assets and escort duties. At the helm of the ship is the commanding officer Captain Rituraj Sahu.

While in Seychelles, the ship will be docked at Port Victoria and will be open to visitors on Saturday October 28, 2017 from 10am to 3pm. All are cordially invited.