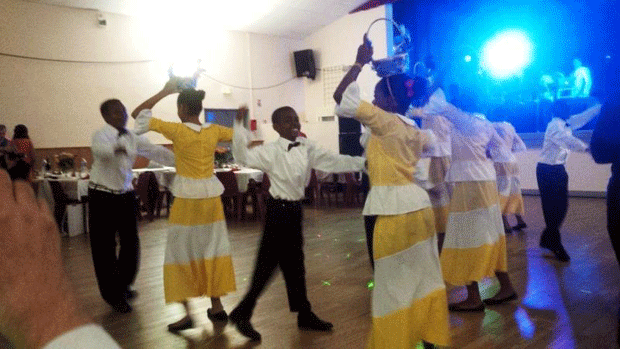 Seychellois children showcased Seychelles’ joie de vivre and cultural harmony through our folkloric and traditional dances at every given opportunity during the International Children’s Festival in Normandy, France. 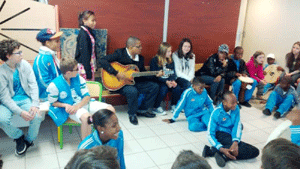 Ambassador Erna Athanasius, together with artistic director from the JJ Spirit Foundation Bennet Accouche, and their delegation of 12 children with talented singer Keshia Boniface, left Seychelles on May 29 onboard Air Seychelles for Paris and returned on Sunday June 14.

During their two weeks in Normandy, the delegation performed at every opportunity, showcasing Seychelles’ joie de vivre and cultural harmony through our folkloric and traditional dance. They benefitted from the exposure to the culture and history of that region and shared experiences with other children from a few other countries, namely, Russia, Madagascar and Kazakstan, as well as those from Normandy. 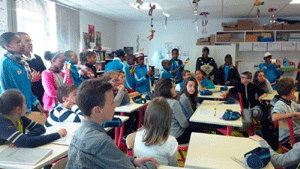 They shared experiences with school children from Normandy and during one of the encounters, the children gave a presentation on Seychelles in French for the benefit of the children in Berneval Le Grand, who had never heard of Seychelles and were in awe of the giant tortoises and the beauty of our islands.

The Seychellois children also spent every afternoon in a different activity like ice skating, visiting a dairy farm, milking a cow and basically learning how the milk industry runs, visiting the different museums in Dieppe, performing at the extra-curricular activities with other children and those performing at the gala show as well, where over 250 young children took part.

A particularly poignant event was spending an afternoon at a residence for the elderly in the host community of Berneval Le Grand, where the joy of song and dance helped some recall their youth and joie de vivre. All of this was thanks to the 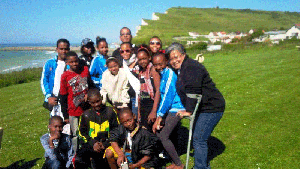 initiative of the Honorary Consul for Seychelles in Normandy, Francis Herbet, who welcomed the idea of holding a Children’s Festival in Normandy and actually made it happen, together with the goodwill of the Mayor of Berneval Le Grand, Patrice Philippe and his wife Pascale Philippe, as well as that of the president of the Communal Community of Petit Caux (Communauté de Communes du Petit Caux) Patrick Martin and his wife.  It was an experience that the children will hold and cherish forever in their hearts.

Of note, Ambassador Athanasius mentioned that during the two weeks in Berneval Le Grand, the Seychelles national flag was seen floating proudly at the Mayor’s Offices, making the delegation feel at home. 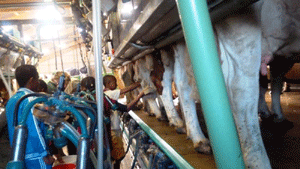 The ambassador also said she is immensely grateful on behalf of the children to the Office of the President, the Ministry of Foreign Affairs and Transport, the Designated Minister Vincent Meriton, for the support and commitment to the project.

She would also like to thank the sponsors for their generosity and belief in the project. Funds were received from many local organisations and private companies and individuals, including: the Children’s Special Fund, Seychelles Petroleum Company (Seypec), Indian Ocean Tuna (IOT), the Breeze Band, the Honorary Consul for Seychelles in Tanzania, the Honorary Consul for Seychelles in Istanbul, Turkey, Island Development Company (IDC), Green Island Construction Company (GICC), Seychelles Trading Company (STC), Cable & Wireless (Sey) Ltd, Allied Builders, Ragaum Financial and Tax company, Flawless Seychelles Ltd (Jouel), Kannu’s Group, Chez Deenu Pty Ltd, Kreolor, Air Seychelles, Abhaye Company Ltd., Seychelles Commercial Bank, National Arts Council, National Sports Council, Imprimerie St Fidèle, Environment Trust Fund and many, many others who came forward and helped the children with whatever they could in a number of ways. No contribution was too small.

She also expressed gratitude for the wonderful collaboration received from the JJ Spirit Foundation and Bennet Accouche and Marianne Ahmad, who worked so hard with the children every week since January this year, and The Playroom at Eden Island, through the Honorary Consul in Tanzania, Maryvonne Pool, which has never failed to provide sponsorship for the certificates and banners as well as the T-shirts and tracksuits for the children’s delegation.

Ambassador Athanasius said the response of the sponsors, many of whom have been regular sponsors since the very first festival involvement in Washington State in 2013, was overwhelmingly touching and an indication that the wider development of our younger citizens through festival involvement abroad is seen as important and meaningful by many.
She has pledged to continue to work on this becoming an annual event on the calendar for Seychellois children to aspire to and wish for, depending always on the benevolence of the corporate sector and other sponsors.

Dr Athanasius would like to encourage others to support this noble cause for next year, adding that any and all contributions to the International Children’s Friendship Festival Fund, at any time during the year, would make a difference and help make a few more Seychellois children’s dreams come true.

She mentioned that she is already planning the next auditions to be held sometime in the last quarter of 2015, in preparation for the next International Children’s Friendship Festival, in April or June 2016, and she calls on all those within the required age group (10 years to 13+ years) to prepare themselves for the event.

Ambassador Athanasius would also like to thank all members of her small organising committee for their hard work and undeniable love of working with, and for the children of Seychelles.
“I could not have done it without them and the team spirit is unquestionably the strongest I have ever had the good fortune of working with and I am already looking forward to the next event,” said Dr Athanasius.

The accompanying photographs show highlights of the children’s visit in Normandy.