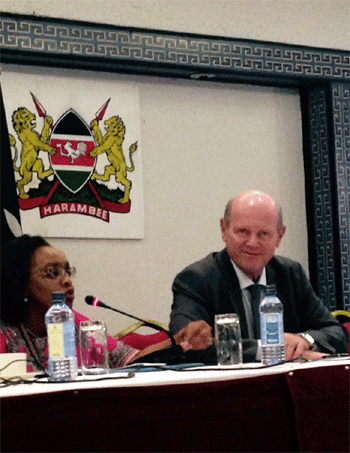 Phyllis Kandie, the Cabinet Secretary at the Ministry of East African Affairs, Commerce and Tourism of Kenya, Agnes Egunyu, the State Minister at the Ministry of Tourism, Wildlife and Antiquities of Uganda and Alain St.Ange, the Minister of Tourism and Culture of the Seychelles were all three sitting on a conference session on Innovation for East Africa Position for Global Competitiveness that was being moderated by Anita Mendiratta, the Special Advisor to the UNWTO Secretary General.

Dr Rose Kisia Omondi, an Executive Member for Tourism and Trade of the Kisumu County Government and Chair of the County Tourism Executives Members Forum and Lucy Karume, the Chairperson of the Kenya Tourism Federation were also part of the conference session with Ministers Phyllis Kandie of Kenya, Agnes Egunyu of Uganda and Alain St.Ange of the Seychelles.

In a packed conference room which included Mr Taleb Rifai, the Secretary General of the UNWTO (United Nations World Tourism Organisation) the three Tourism Ministers fro the East Africa Region and of the Indian Ocean Vanilla Islands discussed alongside Dr Omondi and Mrs Karume proposals to position this tourism region of Africa. With often bold and courageous statements the participants came up with frank proposals that should be looked at in a bid to ensure that the East Africa Region and the Indian Ocean Vanilla islands continue to not only claim their fair share of the tourism markets, but to also increase their share of the holiday makers.

The concept that Africa must work with Africa became the catch phrase in the drive for more cooperation for the benefit of the people of the region and for the successes of their respective tourism businesses.