Breaking News
Home - news - KOZE KILTIR! But who is listening?

KOZE KILTIR! But who is listening? 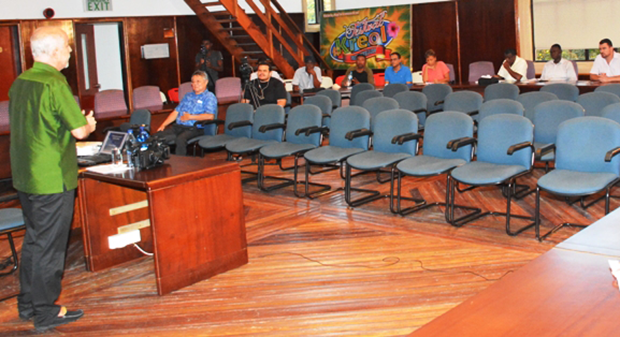 Koze Kiltir or Culture Talks is an ambitious initiative of the culture department to encourage Seychellois to interact with arts and culture.

But what is it exactly? It’s a series of talks or lectures which features a number of Seychellois and foreign speakers on a variety of subjects related to culture, the arts, literature, politics, gender, human rights and various other fields which hold an element of cultural interest.

The programme initially made its debut in 2010 but lost steam because of lack of funds and was abandoned until it was once more launched in April of this year. The culture department tries as much as possible to host lectures twice a month on Wednesdays, from 4.30pm to 6.30pm.

The title ‘Culture Talks’ and its Creole equivalent is nothing if not a clever play on words – a pun, and an agreeable nod at witticism – which attempts to convey the concept of culture “talking” to us.

And culture often does so, either explicitly or implicitly, through all aspects of our lives including our social, political, spiritual and technological lives.

The ultimate aim of these culture talks is to inform and educate the public on how culture is an ongoing and evolutionary process which has greatly been impacted by the past, molds our present and will continue to define our future.

According to the culture department the talks also promote intellectual dialogue, create a database of presentations on subjects of national and cultural interests and so forth.

All interesting and captivating ideas, right?

However the talks have noted low level of attendance which struggles to even reach 50 participants per lecture. The most successful lecture was conducted by Tony Mathiot last week, whose topic of conversation was on the death of Father Teophile, and only saw 40 participants.

According to Mr Mathiot the lack of participants stems from people’s disinterest in things related to culture.

“People are too lazy to come to these events. I believe that Seychellois are not willing to be academically stimulated and that is a shame really,” he offered as explanation.

He continued by stating that the talks are enriching; providing wonderful aperçus on sociological, anthropological and historical aspects of culture, and for this reason many people are missing out.

Indeed lectures held so far have had fascinating titles such as:

Twenty-two year old Rebecca Morel resides at Anse Royale and provides a different perspective to why people are not showing up at these events.

“The time and day they choose to conduct these talks are inconvenient for people like me who live far,” she affirmed.

Ms Morel said that although the talks are interesting, the time between 4.30pm and 6pm on Wednesdays is simply not manageable for those who live far from Victoria, do not have access to their own transport or have a family to cater for.

Amanda Albert, the senior communications and information officer at the culture department, told Seychelles NATION that the mediocre level of attendance is quite discouraging but will not be a stick in the wheels of the culture talks.

“And to think that we put effort and money into advertising the events and paying the lecturers, for only a handful of people to show up! In any case the talks will continue as planned,” Ms Albert concluded.

The culture department has a packed series of culture talks up to November and in fact will be showcasing a presentation by a Chinese speaker on Chinese tea and tea culture.

The question remains however: will people show up?