A group of last year’s dance and music students from the National Conservatoire of Performing Arts (NCPA) have graduated after successfully completing a grade or level in international dance and music examinations.

There were graduates from the lower, middle and upper grades and they received their certificates from Pierre Joseph, director of NCPA, during a ceremony on Friday last week at the National Theatre, Mont Fleuri.

In a short speech for the occasion, the principal secretary for culture in the Ministry of Tourism and Culture, Benjamine Rose, commended the students on their achievements.

“We at the Ministry of Tourism and Culture, especially the culture department, support the programme. We feel it is the stepping stones for students who want to pursue further studies either in dance or music,” she said.
She also thanked parents for supporting their children and all events organised by the conservatoire throughout the year and the staff for being there and supportive all along. 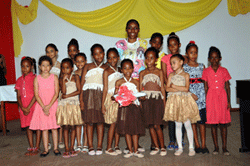 The students were awarded certificates for both theory and practical. There were also dance performances – both modern and traditional — by students from the School of Dance.