‘Let us pave the Tourism and Culture Ministry’s way forward in unity,’ says Minister St.Ange of the Seychelles 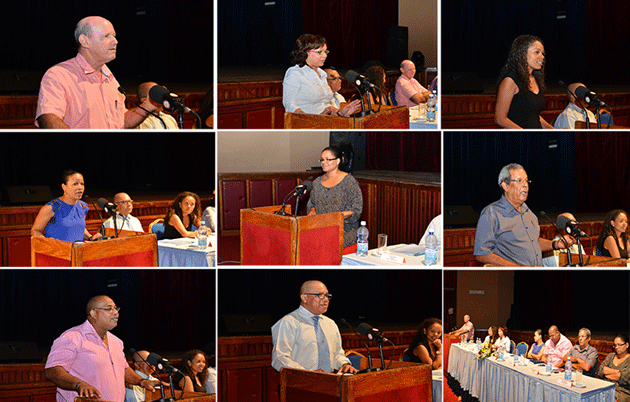 The Seychelles Minister for Tourism and Culture, Alain St.Ange has urged members of staff from his ministry to work together as a team and to pave the way forward in unity.

This message was echoed during the 2015 annual general meeting for all the heads and staff of the ministry.

“We must work together. The members of staff are the most vital elements of the ministry as they are the ones who make it what it is today,” the Minister said.

The aim of the meeting was to present the ministry’s action plan for the year 2015. “It is vital to start the working year with the knowledge of our action plan, and to give each and every staff member an insight of what each department of our Ministry will be doing this year” Minister St.Ange said.

The Minister has described 2014 as having been a good year for the Ministry of Tourism and Culture, adding that it has recorded a number of success stories.

Speaking about the national theme for the year ‘I love Seychelles’ Minister St.Ange said that this theme was closely connected with the tourism industry.

Minister St.Ange announced that during this year’s Tourism Week, the ministry will announce the 2015 hotel of the year and the tourism industry’s staff of the year, as part of the new Campaign ‘I love Seychelles’.

He added that it is an ideal theme to be integrated in the marketing and promotional campaigns of selling Seychelles as a destination.

Another point which Minister St.Ange stressed on was the need to recognise people in the tourism industry.

He added that there is a need to give due recognition to the Seychellois who operate and own businesses in the tourism sector and that under the ‘I Love Seychelles’ the Ministry will be launching a “Proudly Seychellois Owned & Operated” visibility campaign.

The Minister also spoke about the initiative launched by the Ministry of Tourism and Culture with regards to honouring and recognizing those Seychellois who have contributed greatly to the success stories we have as a country and those stories that Seychelles is proud of.

Minister St.Ange gave examples of people like Antoine Abel, a prolific Seychellois writer and poet, who has dedicated his life in bringing forth the literary culture in the country who has been recognized with a bust of his unveiled at the International Creole Institute during the last Festival Kreol of October 2014. He also spoke about the performing artists Wall of Fame where artists David Philoe, Francois Havelock, Patrick Victor, David Andre, Jean Marc Volcy and Jenny De Letourdie now have their very own personalized star on the front wall of the National Cultural Centre of the Ministry of Tourism and Culture.

The ministry has decided to honour these people for their dedication, efforts and ability and for making Seychelles proud.  The Minister added in his address that this was the same idea behind having pictures of all paste Ministers of Tourism and also of Culture at the entrance of his Ministry.

Re-iterating President James Michel’s vision on bringing culture at the forefront of our tourism industry, Minister St.Ange said this should remain a top priority that must be consolidated. He spoke that the planned grading of hotels and resorts will have points awarded based on the inclusion of Creole Culture in the accommodation network of the islands and this included cuisine, music and dancing as well as Seychelles designs in decorations etc.

Minister St.Ange said that for this years annual general meeting it was seen as a necessity to take a new approach by inviting all the Ministry’s Senior Management Team to personally stand and address the meeting and present their action plan for the year. This is why Minister Alain St.Ange only took to the podium after PS Benjamine of Culture, PS Anne Lafortune of Tourism, CEO Sherin Naiken of the Tourism Board, Penda Choppy of the International Creole Institute, Patrick Nanty of the Seychelles Heritage Foundation, Jimmy Savy of the National Arts Council and Flavien Joubert of the Tourism Academy had addressed the Ministry’s Annual Staff Meeting.

“It is also important to make the members of staff feel part and parcel of the ministry. I am happy that together we have achieved many great things in 2014 and we can achieve a lot more this year if we work in unity as we push at the same time for more training opportunities for our Team Members,” the Minister added.

“We need to remain focus as there is much more to achieve if we work together,” Minister St Ange stressed.

The minister added that this year’s national theme ‘I love Seychelles’ relates directly to the tourism industry.

“When we love our country it will be much easier to invite foreign tour operators  and international press to come to our shores,” Minister St Ange added.

He noted that the STB and the tourism ministry are already exploring ways to integrate the theme in their marketing and promotion campaign for this year.
Seychelles NATION will come back on the meeting in a future issue.