The Minister for Youth, Sports and Culture Mitcy Larue was on a familiarisation visit to the inner islands of Praslin and La Digue late last week.

The Minister was accompanied by chief executives of the various departments of her ministry, several other high officials and members of National Assembly from Praslin.

“The main aim of our visit over the three days was to see how the various departments of our ministry can collaboratively join forces and work together in devising various programmes which include all three aspects. We have visited the various facilities and seen the concerns of the staff, our key resources which run the various departments, as well as hear their propositions for improvement. For 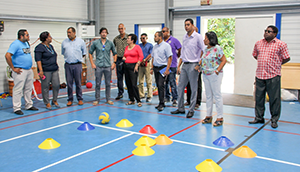 example, we have seen that more effort must be made in maintaining our infrastructure. As our culture is the soul of our Nation, it should be promoted and brought to life. In bringing the youth, sports and culture together we can bring that synergy to unify our people. It has been a very busy but fruitful trip. After this visit we will be able to prepare an action plan of how to move forward,” the minister said.

The delegation visited the national libraries, youth services bureaus and sports complex and other sports facilities on both islands.

Giovanna Rousseau, chief executive of the National Sports Council (NSC) presented the NSC’s project of building a Regional Sports Centre on both islands which will better meet the needs of inner island athletes. They also visited the Praslin swimming pool situated on Eve island. 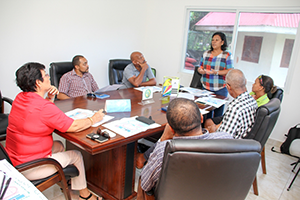 The delegation also visited the Anse Kerlan and Anse Boudin community centres which are both not operational. The minister is scheduled to liaise with responsible departments to transfer these properties to her ministry so that it can be repaired and used for cultural purposes and youth camps on Praslin.

The Vijay International School’s multipurpose hall welcomed the idea of working with the ministry to make use of the hall for sports or other activities for the benefit of the inner island community. Further discussion will follow following the visit to the hall which was built entirely from private donations. 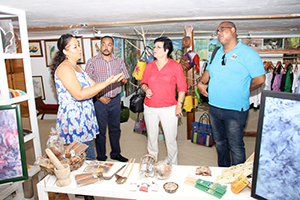 The delegation also had the chance to discuss with representatives and staff of the ministry as well as sportsmen and artists on both islands. This was an opportunity to raise their concerns, among which are a lack of sports equipment and lack of an art village which can be used by both visual and performing artists.

Minister Larue and her delegation also watched a first division football match between Côte D’Or FC and LightStars FC, both teams from Praslin.