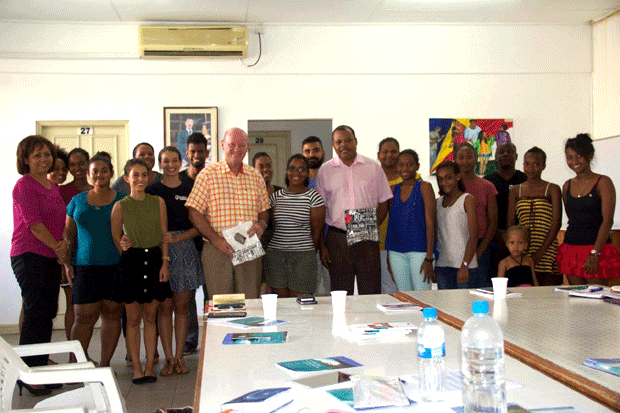 “We are no longer selling sun, sea and sand- culture and the people are at the center of our tourism development,” said minister for tourism and culture, Alain St.Ange on Saturday 14 November before a group of young enthusiasts of sustainable tourism at the youth center of English River. Also present at this short consultative meeting was principal secretary for tourism, Anne Lafortune and minister for entrepreneurship development and business development, Michael Benstrong. The event hosted by SIDS Youth AIMS Hub (SYAH) is an attempt to increase youth interest in sustainable tourism. The ‘take-home’ message was that there were potential for youth to take the lead and embark in innovative tourism opportunities.

The meeting came at a fitting time as only two weeks ago the ministry of tourism began works to promote tourism establishments bearing the brand ‘Seychelles Sustainable Tourism link’. This endorsement from the ministry of tourism principally means promotion for these respective establishments. However, the issue remains that while there are a lot of choices for accommodation in the Seychelles, there are not enough ‘leisure activities’. It is for this reason that the same ministry was looking into the promotion of our people and our culture through innovative tourism opportunities. “The tourism yield can only improve once we are able to provide tourists with viable activities which should keep their money that otherwise return with them to their countries,” said Minister St.Ange.

Some of the ideas which emerged from the discussions ranged from instant photo-framing of pictures taken at key sites, sale of artisanal products at key touristic locations, reef excursions, personalized excursions, the ‘Seychellois’ experience comprising of inviting tourists to explore Seychellois homes, traditions or culinary. Not to mention ‘climate change tourism’, for example the construction of a submerged model of the town Victoria whereby tourists and locals alike can dive through and be warned about our very existence as islanders being threatened due to inaction on climate change. The idea was greatly welcomed by the two ministers who claimed that there was a similar project on the way- bringing one of the atolls to Mahé. After all, it is a well-known fact that very few Seychellois have had the chance to visit Aldabra for example.

On his part, minister Benstrong provided guidance on the realization of these projects through the two arms of his ministry; the Seychelles Investment Board (SIB) and the Small Enterprise Promotion Agency (SENPA). He also addressed issues such as the Environment Impact Assessment (EIA) process, the promotion of green energy in tourism establishment and the much-anticipated moratorium ceasing construction of large hotels. Some of the concerns raised by the youth were beach access to locals following complaints that hotel security guards were preventing locals from accessing beach areas. Another point raised was the lack of data to make strong supported arguments during EIA processes. On this note, Mr. St Ange had remarked that nongovernmental organizations had a lot of technical expertise as well as powerful links to easily influence government decisions.

For this same reason, NGOs needed to be informed of the works carried out by the different ministries. Ideally, they are consulted during the preliminary stages of projects to provide their insight on the issue at hand. One such example is the tourism master plan currently being reviewed by a foreign consultant. A follow-up session with the consultant was promised by Minister St. Ange to allow SYAH members to contribute towards the document. Another example is the Greater Victoria plan which promises to encompass more tourism opportunities. The youth also challenged the ministers as to their position towards climate change and Minister St.Ange expressed that he was worried about the many developments on the coastline presently. Much debate however arose from concerns on the moratorium, specifically restricting people to develop their land as they pleased.

Following the pleasant exchanges between the youth and the two ministers, co-founder of SYAH Seychelles, Angelique Pouponneau presented the two ministers with a branded t-shirt, Seylingo as a sign of successful youth entrepreneurship on behalf of the association. Minister St.Ange on his part said that he enjoyed this meeting with the youth of the Seychelles. “We discussed freely and they asked questions as they wanted. It was so refreshing to see this level of interaction which can only be beneficial for Seychelles. For me this is all part of the process of staying connected” Minister Alain St.Ange said

2015-11-19
Georges
Previous: Congratulations is in order for the Tourism Board says Minister on Seychelles being voted ‘Country Destination of the Year’
Next: Stakeholders meet to revamp Companies Act for a modernised business landscape