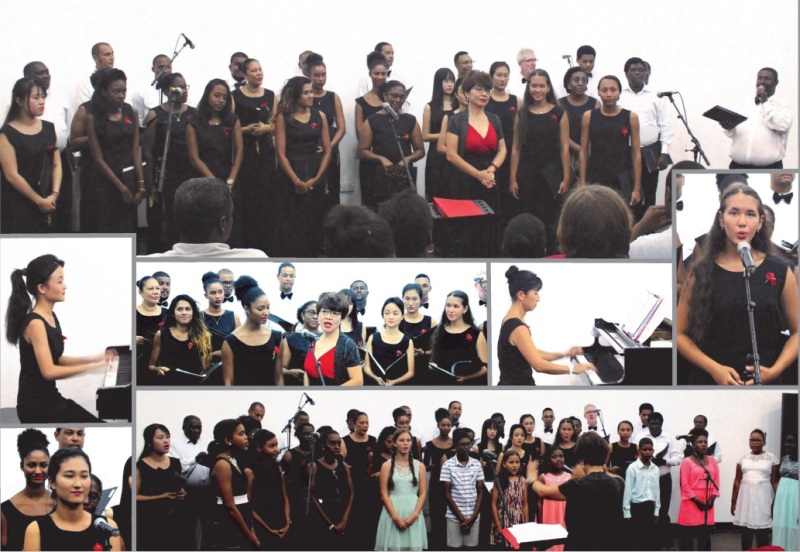 The week September 18-23 was a busy week for the National Choir. Three concerts all together next to weekly rehearsals but the highlight was surely the full show with a full choir member attendance on Saturday September 23. A concert intended to raise some funds with their tickets and CD sales. The purpose: to help fund their next trip for an international competition for choirs in China. Their invitation is on the table and they are making preparations.

That said it needs to be recalled that about eight years ago, our own Seychelles National Choir won that prestigious competition with a Creole worded patriotic song called ‘Mon Patri’ (‘My Land’).  It is easy to be proud of our professional National Choir which can compete internationally under the excellent guidance of Mrs Xiaoju Lownam, their conductor.

At the Mont Fleuri’s SITE auditorium on Saturday September 23, the audience witnessed another jubilant performance by this remarkable choir of 29 members under conductor Mrs Lownam. Dedicated as ever, they honoured their tradition of delivering a professional choir concert with some devoted and outstanding solos by Xiaoju Lownam herself (a rare treat) and Daniele Denis, Jade Jolene du Preez and Li Xinwei, all three excelling vocal students of Mrs Lownam and a piano solo by her own and very talented daughter Xiaolang Lownam.

The evening was opened by MC Andy Wirtz, himself a choir member, who pointed out that this time round it took them a while to make a selection for the evening’s programme. It became a varied show that combined classical music and traditional folklore, such as pieces from baroque composer Vivaldi, and newer pieces from John Rutter, Hammerstein and Francesco Sartori, combined with traditional Creole and Chinese folklore origin music. Some of the Christian religious masterpieces were also included.

An unusual start and a highlight of the evening, during the interlude of ‘Laudamus Te’ the audience got a rare performance from opera singer, local vocal senior instructor for NCPA (National Conservatoire of Performing Arts) and CINEA and conductor of our National Choir, the extremely valuable Mrs Lownam. She sang in a duet as Mezzo with Soprano Daniele Denis, one of her highest educated vocal students. Thereafter the whole choir started singing Antonio Vivaldi’s ‘Gloria’.

With the next song ‘Be Thou My Vision’ by English composer John Rutter, we got a taste of Mrs Lownam ’s children vocal ensemble, of which she hopes that some of the talented young singers will one day become members of the National Choir. It was a sound and lovely performance.

After the children ensemble the first ‘Solo’ set started with members of the National Choir who are long standing voice students of Mrs Lownam’s and undergo International grading (ABRSM Exams). Li Xinwei delightfully started the set with ‘The Path To The Moon’ by Eric Thiman with its dreamy poetic fantasy melody, a song with its long melodic lines that suited Lin’s voice well. Well done!

After Li Xinwei came Jade Jolene du Preez, who participated earlier this year in an international competition at the Sanremo Junior world finals singing ‘A Whole New World’ from well-known Disney cartoon Aladdin. That evening she performed another piece from an old musical ‘The King And I’ by Hammerstein and Rodgers with ‘I have Dreamed’ – a song that once Jade’s idol Barbra Streisand performed at Broadway. Jade became an alto with a warm, well textured sound and a vocal capacity reaching the high notes as well as the low ones. Jade enchanted with the romantic notions of the musical lyrics performed and acted the song out charmingly and received a long and warm applause.

A set of four religious songs were next with the Seychelles National Choir at its best with the almost impossible and challenging ‘If Ye Love Me’ by Thomas Tallis which was performed to near perfection. According to Tom, a senior and most experienced choir member and one of the bass singers: “At first when we practiced it, I was not sure if we ever would pull this off, but now I am so pleased. With tonight’s performance we managed to perform it to near perfection.” And it was truly breath-taking.

The conductor’s daughter, who is a very talented piano player, was next to show her skills. Xiaolang Lownam, who at times fortifies the National Choir and is a permanent member of the Confusius choir, showed that she plays the piano well; first during a serious Sonata of Domenico Scarlatti in B minor and then she poked fun with ‘Humoresque’ by contemporary Belgium Composer Jean Absil. Xiaolang Lownam tackled the song with a sprightly sense of fun. Brilliant!

Daniele Denis then beautifully performed ‘Time To Say Goodbye’ (a song written for Andrea Bocelli) which was her second solo that evening. Daniele is a lovely soprano with a glorious future, not as a singer, even though she could, but she’s here for her short break as she is studying engineering in Malaysia. She truly took off in the last opera-esque part of the song. Bravo! The audience in its whole was extremely appreciative.

A traditional potpourri by the whole choir followed: the western ‘Autumn Leaves’ gave way to a jubilant mood with the ‘Youth Dance’ a Chinese Folklore piece with some energetic knee bends between the ping pong of the parts taken over by the diverse sections of the choir, sometimes the altos went down then the sopranos or the tenors, very entertaining to watch and brought a joyful smile to all choir members, their whole body language and even their voices expressed that infectious smile. It became a crowd favourite.

Beautiful ‘Mon Patri’ based on Mongolian folk tune, then the ‘Carnival Nights’ waltz by Strauss followed.

Thanks to the sponsors were expressed by the MC namely the Ministry of Youth, Sports and Culture, the Chinese Embassy and the Chinese community in Seychelles, The Maltese embassy, Barclays Bank, CINEA, NCPA, the Confucius Institute. Not forgetting to thank the National Choir Committee, the choir members who are always there for rehearsals, the piano accompanist Mrs Kuniko Boniface who’s been on this journey with the National Choir for many years and to their wonderful conductor maestro Lownam.

Again our remarkable National Choir was dedicated in maintaining and honouring a tradition of excellence and reflecting some of the essential elements in the present global music arena.