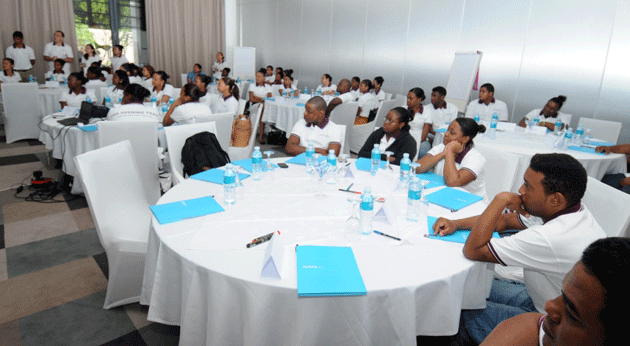 Forty Seychellois have been recruited by the AVANI Seychelles Barbarons Resort & Spa.

This is the second batch of employees to be recruited by the resort, which is due to open on February 2, 2015.

The new recruits were welcomed during a ceremony yesterday by general manager Manish Jha and the management team. They will spend three days in orientation and get to know the various departments.

“We are gearing up for the opening of the hotel and we will be welcoming another batch of new staff on January 15. On January 9 we are holding another recruitment fair as we still have some 60 positions available,” said Mr Jha.

AVANI Hotels & Resorts is the newest brand launched by the Thailand-based Minor Hotel Group in 2011.

“AVANI hotel in Seychelles is our 122nd hotel and it’s our first hotel in the Indian Ocean. Next year two hotels will open in Mauritius,” Mr Jha noted.

Following an extensive US $14 million refurbishment, AVANI Seychelles Barbarons will be the first resort of its kind on the island, blending all the right ingredients for relaxation with a dash of colourful culture and exotic island life, said the GM.

The hotel will have 124 guest rooms and suites each featuring a balcony or terrace with garden, pool or ocean views, and essential comforts inside.
Five room types include options with easy access to the spa and sandy beach.

AVANI Hotels & Resorts was launched in 2011 to complement Minor Hotel Group’s five-star Anantara brand.  The brand currently has six properties in operation in Sri Lanka, Vietnam, Malaysia and Mozambique, with a pipeline of further openings in Asia, the Indian Ocean and Africa.
Minor Hotel Group has plans to grow the brand across Asia, India and the Indian Ocean and in the Middle East.

Minor Hotel Group is a hotel owner, operator and investor currently with a portfolio of 119 hotels and serviced suites in operation under the Anantara, AVANI, Per AQUUM, Oaks, Elewana, Marriott, Four Seasons, St Regis, Radisson Blu and Minor International brands. Today Minor Hotel Group operates in 19 countries across Asia Pacific, the Middle East, Africa and the Indian Ocean. With ambitious plans to grow the hotel group to 150 properties, Minor Hotel Group continues to expand the home grown brand of Anantara and its newest brand, AVANI.

2015-01-07
Georges
Previous: Seychelles Tourism Board CEO congratulated for closing 2014 with a plus in visitor arrivals
Next: Street Party dan Victoria – En gran lafoul i akey lannen 2015