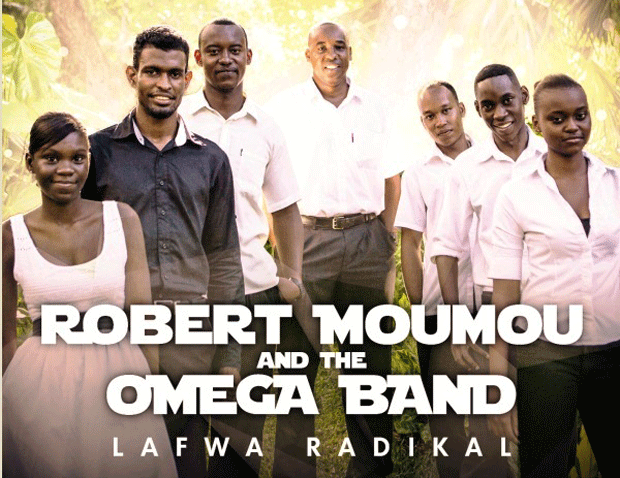 A new 14-track gospel CD has just been released by Robert Moumou and the Omega Band.

The main theme of the album is Jesus teaching on Salvation. Even though Christianity is a Religion about loving everyone, when it comes to the topic of Salvation Jesus stated clearly that the only way to be saved is through him and him alone. This is further explored and put across in Songs like Zan 3:3, Zis en Non, Zezi Limenm, Pa Tarde and Teste.  The words of Jesus on this topic is rather firm and challenging. Salvation being the basis of the Gospel of Jesus is sung as Jesus radically preached it, using non-traditional Christian genre of music, hence the title of the album Lafwa Radikal or ‘Radical Faith’.

Robert has been involved in Church music for the past 18 years, leading praise and worship in Sunday services along with the band at the Grace and Peace Baptist church and also in gospel shows.

“As we came to practice we started to create our own songs especially in the jam sessions. So we decided that it was time to make them available to the general public,” says Robert.

Most songs are in Creole and the music style ranges from sega and reggae to slows and seggae, giving the album a more tropical and Creole flavour.

Other than Salvation the other theme explored is about enjoying Life in Selebre Lavi, Positive Manhood in Mon Fyer mon en Zonm, the wedding vows in Mon Promes which was Robert’s gift to his wife in 2003, the love of God and simply praising His Name.

Omega Band has been existence since the year 2000, playing mostly in churches outreach programmes and national gospel shows. They took part in the ‘Bring It On’ talent show in which they won third prize in the group category. Marthina Labrosse, who is also a member of the band, won first prize in the 18-25 years old category with her song Anmenn mwan which also features on the album.

The album is presently on sale at R125 at Ray’s Music Room, Seychelles Bible Society, Kot Do, Everlasting Love Ministry office (Oceangate House), St Fidèle Bookshop. You can also buy it with all members of the band in the photo for only R100.

All songs have been recorded and mixed by Eddy Telemaque at Relation Sound Studio.

A sample of the songs on the album is also available on this link https://soundcloud.com/robert-moumou/teste.

Robert Moumou and the Omega band would like to thank all their sponsors namely AP Designs, Steve Nibourette, Jubilee Rentals and Jubilee Trading.