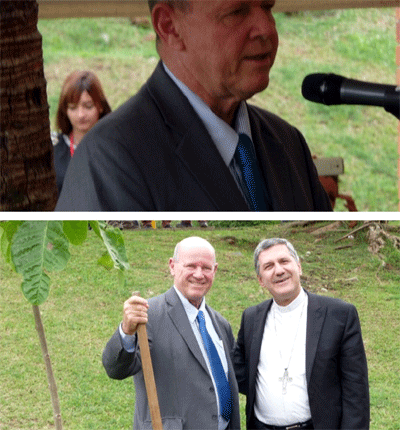 Minister Alain St.Ange addresses the Peace Park dedication event and below with the Archbishop of Medellin Colombia after planting their tree in the Peace Park

The International Institute for Peace through Tourism (IIPT) used the 21st UNWTO General Assembly taking place in Colombia to dedicate a Peace Park at the University Gardens of Medellin. The continued drive by Louis D’Amore, the IIPT Founder and President continues to position peace as the needed catalyst for a better world and he was surrounded for this latest exercise by Taleb Rifai, the Secretary General of the UNWTO (United Nations World tourism Organisation), Minister Sandra Howard Taylor, the Vice Minister of Tourism of Brazil and Minister Alain St.Ange, the Seychelles Minister responsible for Tourism and Culture.

After a blessing by Archbishop Ricardo Tobon Restrepo of Medellin, Mr Taleb Rifai, the Secretary General of the UNWTO, Minister Sandra Howard Taylor, the Brazilian Vice Minister for Tourism, Minister Alain St.Ange, the Seychelles Minister responsible for Tourism and Culture, Mr Rafael Millan, the Executive Committee Member of Skal International were invited by Geoffrey Lipman, the President of the International Coalition of Tourism Partners (ICTP) to address the event before Dr Louis D’Amore delivered his own address.

It was Minister Alain St.Ange of the Seychelles who asked everyone during his address to use this opportunity at the inauguration of a Peace Park in Medellin Colombia to give each other a sign of peace as is today common practice at the Roman Catholic Churches.

Minister St.Ange of the Seychelles said that he found the even a moving one especially as the world is today more in need than ever before to see the the world embrace the culture of peace