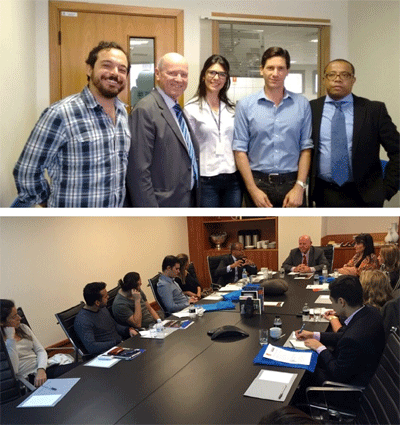 Top photo at R7 and below and Minister St.Ange addressing one of the many press meetings in Sao Paulo

The large number of press meetings addressed by Minister Alain St.Ange, the Seychelles Minister responsible for Tourism and Culture during his two days working visit to Sao Paulo in Brazil made the island Minister’s visit a total success he said as he left Brazil for Colombia. Minister St.Ange was accompanied at these press meetings by Stephane Perard, the Emirates Brazil Area Manager and Gisele Abrahoa of the Seychelles Tourism Board’s Brazil Office. Minister Alain St.Ange was in Brazil at the invitation of the Emirates Brazil Office.

Among the press who interviewed the visiting Seychelles Minister as he was in Brazil were:- Fred Marvila of Sundaycooks, Ricardo Battistini and Fran Oliveira, the Director and Editor in Chief of VERSATILLE Magazine, Carlos Marcondes of Amanaje Communications, Shoichi Iwashita of SIMONDE Magazine, Daniel Thompson of Mochileiro das Vilhas, Atila Ximenes, the Founder and Publisher of VOU CONTIGO, Denise de Almeida of UOL among others.

At each and every press meeting Minister St.Ange repeated that he was now convinced that Seychelles was the new holiday destination for Brazilians. The Minister highlighted the unique selling points of the Seychelles and expanded discussions on the eco-approach of Seychelles in its tourism development. “Our culture and what makes the Seychellois the friendly people we are” was a statement the Minister also reiterated often in his many press interviews.

“I am in Brazil at the invitation of Emirates Brazil to help increase the visibility of the islands. We saw the important press bodies and personalities and we launched new air fares by Emirates for a seychelles holiday via Dubai. I am certain we shall see a marked increase in visitors from Brazil travelling to Seychelles” said Minister St.Ange as he left Brazil.