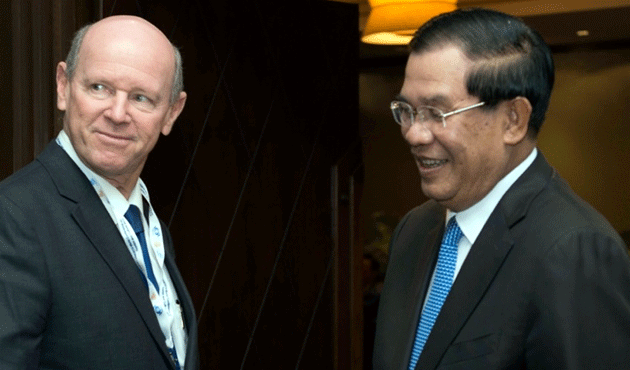 The Prime Minister of Cambodia, Mr Hun Sen who graced the opening ceremony of the first ever joint conference by the United Nations World Tourism Organization (UNESCO) and United Nations Educational, Scientific and Cultural Organization (UNESCO) on tourism and culture took time to meet participating Ministers of Tourism and of Culture coming to Cambodia from the four corners of the world.

Alain St.Ange, the Seychelles Minister responsible for Tourism and Culture was one who had the honour to meet with the Cambodian Prime Minister. Minister St.Ange is one of six Ministers holding both tourism and culture portfolios who arrived in Cambodia for this first ever Tourism and Culture Conference. In total some 46 Ministers are in Siem Reep in Cambodia after the joint call from both the UNWTO and UNESCO for discussions on more understanding by the Community of Nations to see culture find its rightful place in tourism development.

Seychelles is one country where tourism and culture  sits in the same Government Ministry and where the President of the Republic, Mr James Michel launched the drive to include the island’s culture in the marketing of Seychelles.

Minister Alain St.Ange is being accompanied by Benjamine Rose, the P.S. for Culture to this inaugural conference under the banner of “Building a New Partnership”.

2015-02-05
Georges
Previous: The Monuments of Victoria
Next: Tourism Ministers from Africa meet at UNWTO Headquarters in Madrid