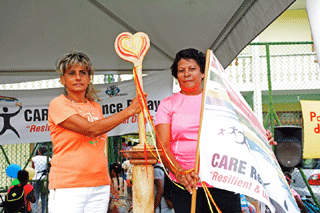 With the issue of drug abuse being an ever-growing problem in our society, the chairperson of the Campaign for Awareness, Resilience and Education against substance abuse (care) Sarah Rene has said once one starts using drugs one loses direction in one’s life.

Mrs Rene said this when addressing the large crowd of care clubs members at the Freedom Square on Saturday to mark the end of the resilience relay.

She said: “Once we start using drugs, we lose our lives, our sense of life and we lose direction in our lives.”

It was a strong message to everyone as the battle against drug abuse rages on within our small nation. 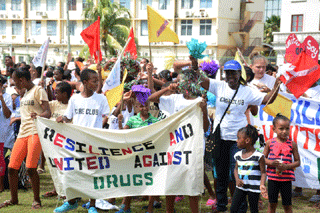 The last leg of the resilience relay started at the Inter-Island Quay, where representatives of La Digue school disembarked for the Cat Cocos ferry to continue the relay into Freedom Square, via Independence Avenue with 2015 Miss Seychelles … Another World Linne Freminot and her two princesses carrying the baton for its last leg.

The baton had been travelling across all the schools, where children wrote messages based on drug abuse to their fellow colleagues. 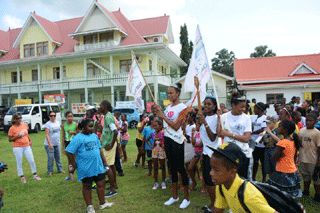 The final message came from La Digue school where Anilah Bibi was given the honour of reading it.

“Let’s not let ourselves become victims of drugs and alcohol,” she said. “We should not let our country be destroyed by dangerous substances and should create a barrier against such things.”

She urged the youths to make the right choices and to remember that they are not alone in any situation.

On entering the Freedom Square, the baton was presented to Mrs Rene, while Ms Rousseau was given the flag. Both the baton and the flag were stationed in a convenient place as the ceremony continued

Mrs Rene thanked the various partners who have helped with this campaign and said every effort we make to stop this social ill helps in a big way no matter how small the effort is. 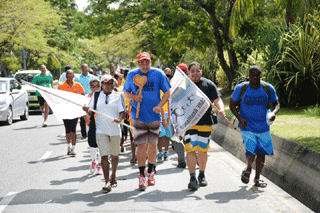 The closing of the resilience relay also marked the launch of the Care clubs day during which schools’ care clubs from around the country get together for various events.

“No matter how much noise we make, the relays and campaigns, we have to remember that to truly help someone affected by drugs is to befriend them, connect with them and help them out of their state,” said Mrs Rene.

The message being sung throughout Victoria and across the schools during the past month was loud and clear: ‘SAY NO TO DRUGS’.

The accompanying photos show highlights of the event on Saturday.