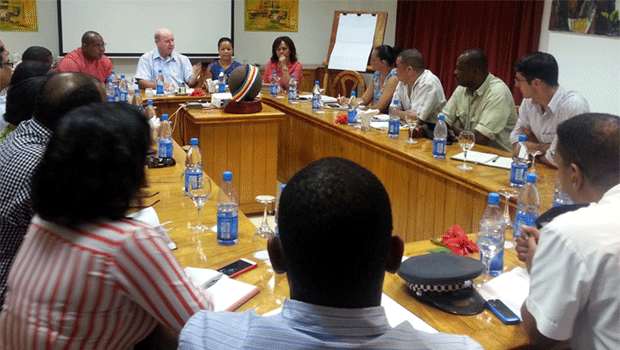 A meeting at the Domaine de La Reserve Hotel that took place at the end of last week has re-confirmed that the second edition of the Praslin Culinary & Arts Fiesta will take place from the 4 to the 6 of September.

The meeting that was chaired by Alain St.Ange, the Seychelles Minister responsible for Tourism and Culture gathered together the two Praslin MNAs, the Hon Volcere and the Hon Esther as well as the two Praslin DAs, Benjamine Rose, the PS for Culture Anne Lafortune, the PS for Tourism, Jimmy Savy, the CEO of the National Arts Council (NAC), Police Representative and other Government Officials, Praslin Hoteliers and other tourism professionals.

The meeting was called to discuss the 2nd Edition of the Praslin Culinary & Arts Fiesta and to get feed back with interested parties on Praslin itself on what they wanted to see organised for their fiesta.

After lengthy discussions it was agreed that the dates for this year’s event would be the 4 to the 6 of September. The Friday evening would be a night where hotels and restaurants on Praslin would be invited to create creole specialities and advertise for dinner dances. Music and dancing would be replicated in the two District Administration Centres for a ‘Bal Creole”.

Saturday morning would see the official opening of the Praslin Culinary & Arts Fiesta that would coincide with an Arts Exhibition and the Culinary Competition. Stall last last year would be erected at Cote D’Or were everyone would gather for fun and enjoyment.

The Praslin Committee is currently putting final touches to the program but everything is now confirmed for everyone to meet on Praslin from the 4 to the 6 of September for the 2nd Edition of the Praslin Culinary  & Arts Fiesta.