Seychelles appreciates cultures of the world, said Minister for Tourism and Culture

Seychelles prides itself as appreciating the cultures of the world. A statement strongly propelled by Alain St Ange, the Minister for Tourism and Culture at the official opening of the Chinese Bazaar organised in line with Seychelles-China Day. 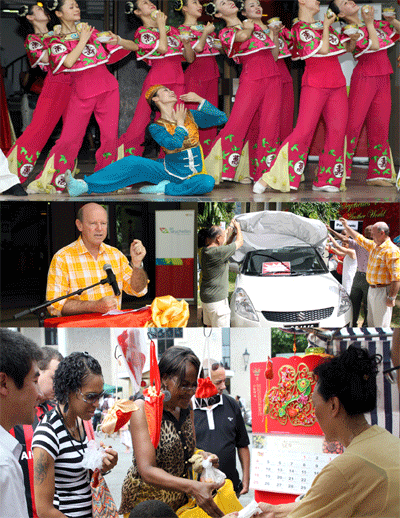 The statement was rightly said as the three-day event presented Seychelles’ swirl of colours with dance and song performances from ‘’Shunde’’ and ‘’ Chengdu’’, much to the likes of the public gathered in the garden of National Culture Centre.

Standing on the entrance of National Culture Centre, Minister St Ange spoke of the strong connotation this building brought to the event.

‘’ If we have gathered here, it is because we believe and value culture,” he said.

Minister St Ange said today the Chinese community is ‘’ part and parcel of the Creole people’’.

‘’We want you to cherish this link which strengthen Seychelles as a nation’’.

The star prize is a brand new Suzuki Swift sponsored by Kim Koon Motors was displayed in the garden of the National Culture Centre. Under the watchful eyes of Ministers and dignitaries attending the official opening of the Chinese Bazaar, ambassador Yin and Minister St Ange unveiled the star prize.

The public could then view the different stands displaying Chinese products and enjoyed the Chinese treats Seychelles-Chinese community were selling.