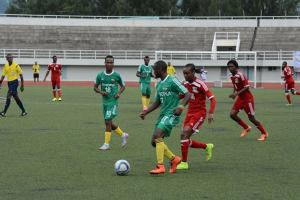 File Photo of Seychelles and Ethiopia’s encounter at Stad Linite in September 2015 which ended on a 1-1 draw. Seychelles were eliminated in the AFCON2017 after losing 2-1 to Ethiopia (Patrick Joubert, Seychelles News Agency)

The Seychelles’ national football team drew 1-1 against Mauritius in the second leg of the Southern Zone qualifiers for the Total African Nations Championship (CHAN) on Saturday but failed to progress to the next round.

Playing before the Seychellois public at Stad Linite, on the eastern side of the main island Mahe, the Seychelles’ side needed a victory to have a chance at making it to the second round. But the visitors stunned the local crowd with a goal in the 14th minute through Louis Marco Dorza.

The Seychelles‘ team was trailing 1-0 with an aggregate score of 3-1, after losing 2- 1 in Mauritius at the end of the first half.

Speaking to SNA on Saturday, the assistant coach of the Seychellois team, Basil Hoareau said, “It was not really bad. For the first half we had a little too much respect for Mauritius, but overall our performance was good.”

Refusing to give up, the Seychelles stepped up their game, threw caution to the wind and got their due reward when Leroy Corallie scored from the penalty spot, making the score 1-1.

“We had the chance to go into extra time and even scored a goal, which I still don’t understand why it was disallowed by the referee,” Hoareau told SNA.

The Seychelles’ assistant coach was nevertheless happy with his team’s performance which he said was a lot better than the first leg at Belle Vue in Mauritius.

“There was a lot of improvement in the match we played here in front of our public. We were attacking more and we did not concede goals easily like we did in Mauritius. We came with a more offensive approach but Mauritius scored before us. We did not let that disappoint us but stayed focus to find the equaliser,” Hoareau said.

Seychelles, a group of 115 islands in the western Indian Ocean, failed to progress to the next round despite the draw as they lost on aggregate 3-2 to Mauritius.

The Total African Nations Championship (CHAN) is a football competition where participating national teams are composed of players playing in their domestic league only. The finals will be hosted by Kenya between January 11 and February 2 next year.

For the players of the Seychelles team, Hoareau said they will soon be preparing for the AFCON 2019 competition against Libya with the possibility of a training camp in Morocco.

The group stage of Africa Cup of Nations (AFCON2019) starts June 5 and only the top teams and the three best runners-up from the 12 groups will join host Cameroon in the finals.

The Seychelles’ side is in Group E which includes two of the best teams in African football, Nigeria and South Africa.

Seychelles starts the qualifying round matches on June 9 away from home against Libya.

2017-05-02
GeorgesK
Previous: Artist profile – Jany de Letourdie: “Do as much good as you can…it will come back to you”
Next: CINEA gears up for 1st Jazz & Blues Festival