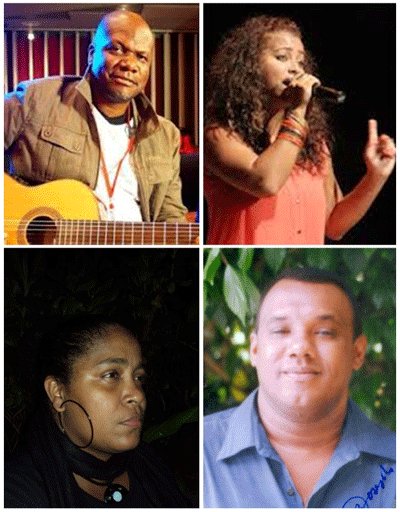 For the first time in its History, Seychelles will get its Festival Kreol hymn. The Seychelles Music Association ( Seymas) and National Arts Council have selected five past winners of the Festival Kreol song competition, whose song’s lyrics reflect the essence of the hymn’s theme. Johnise Juliette, Patrick Joseph, Simon Amade, Jean Marc Volcy and Sandra Esparon, all first time winners of Festival Kreol song except for Joenise Juliette, who came out second, are the chosen voices for the hymn. Alain Bacco Executive Board member of the Seychelles Music Association, who also presented the idea to Festival Kreol Committee of having a hymn to mark Festival Kreol 30th edition said the hymn’s theme which reflects the evolution of the Festival since its first to forthcoming 30thedition, celebrated this year in the month of October, will be highlighted in the lyrics written by the five artists. Now that all artists have been called in to write the hymn, the coming weeks will prove to be decisive. Inspired by the hymn’s theme, they will sit down together to write the lyrics. The team will then move into the studio to record the hymn. Alain Bacco said he had already composed the music of the hymn, which he said is “a proposal which can eventually change form as the lyrics start to surface”. For the past 30th editions of Festival Kreol, Seychelles had adopted Joe Samy’s hit song “ La Sezon Kreol” as it’s Festival Kreol hymn. One of the most beautiful songs of Joe Samy, “ La Sezon kreol” is without doubt the one song that is played over and over again on the radio during this season and pleasantly imprinted in the crowd’s mind, and also especially appreciated by our foreign visitors.  The Festival Kreol hymn will be launched in the month of September.

The voices behind the hymn…

Born in January 29th 1996, the Jean Marc Volcy “Vendredi sen “ song had the effect of a bombshell as it hit Seychelles cultural landscape. The Seychellois public took ownership of the song as it boosted their pride and sense of identity. With the track hit, Jean Marc Volcy made his mark and went on to produce many albums and stage many performances. In 1996, Jean Marc Volcy took the lead in the Festival Kreol song competition and won first prize .

Johnise Juliette’s long and lasting love affair with Creole music started in started at a younger age. But it was only at 1987, that music singing became “part of her life”. It was in 1995 that Joenise Juliette crystallized her mark on the musical arena with her hit song “larenn Sega” which earned her the reputation of Seychelles’ Sega queen.  Beside her vast repertoire of Creole hit songs, Joenise composed “Sapo Sikse” and earned the second place in Festival Kreol song competition organised in 1994.

Simon Amade’s uncontested talent and Creole songs repertoire were famous in 1980’s, when he conquered the country’s musical stage with his hit song “si mon ti konnen”, Simon Amade kept his print as one of the country’s most promising artists of his generation.  It was at the aged of 17 that Simon Amade started to develop a keen interest in music.  Winner of various national day song competitions, in 1993 Simon added another trophy to his accolades by winning first prize in Festival Kreol song competition with the song “lafet in ariv ankor”. Simon Amade was born in 1964.

Patrick Joseph’s hit song “Lavi lontan ti vreman gou”composed while he was doing his national Youth Service, opened up his musical career in the country’s musical arena. Humble Patrick Joseph doesn’t see himself as a star in Seychelles musical arena, but “a serious artist”. Raised in a family where his father was a singer and later on his brother, Patrick Joseph won first prize in 2005 Festival Kreol song competition with “ Prezerv nou lidantite”