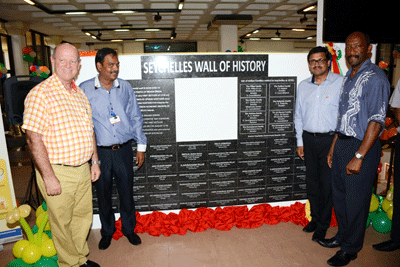 A spectacular sand sculpture depicting the face of the father of the Indian nation, Mahatma Ghandi, and other symbols of peace and non-violence are on display at the site of the ex-children’s playground.

All these are the work of world re-known Indian sand artist Sudarsan Pattnaik from Orissa and they are part of activities organised to mark the third Seychelles-India Day. President James Michel made sure he caught a glimpse of the sand sculpture last night.

Employing non-violent civil disobedience, Gandhi led India’s Independence movement and inspired movements for civil rights and freedom across the world.
He was born on October 2, 1869 and yesterday was his birthday. 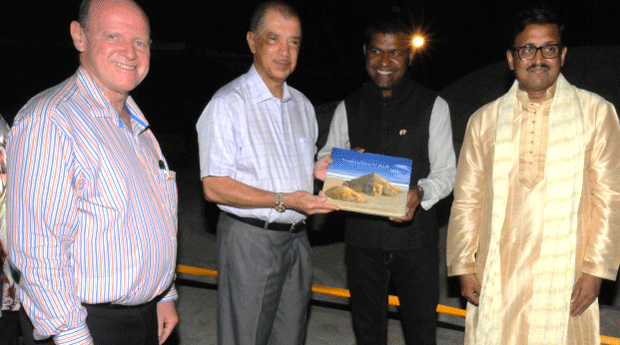 Mr Pattnaik said it took him two days to complete the sculpture which is still gracing the ex-children’s playground for everyone to see. It is expected to remain intact weather permitting all throughout the weekend of activities.

At yesterday’s opening of the sculpture display, a first in Seychelles, everyone present had the chance to see the great artist. 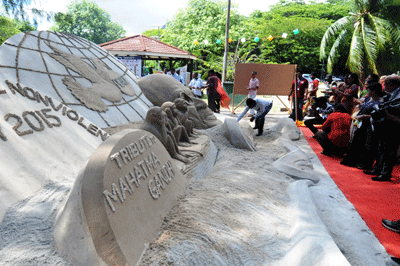 It was the first in a series of activities to showcase the Indian heritage of the Seychellois culture.

Present at the event were ministers Christian Lionnet of the Land Use and Housing, Alain St Ange for Tourism and Culture and Vincent Meriton for Social Affairs, Community Development and Sports, Indian high commissioner to Seychelles Sanjay Panda, members of the Seychelles-India Day organising committee, naval officers from visiting Indian vessels as well as a large number of Indians living and working here among other guests and locals.

Minister St Ange described the event as a joyous occasion under the theme of peace conveyed by Mr Pattnaik through his sculpture. 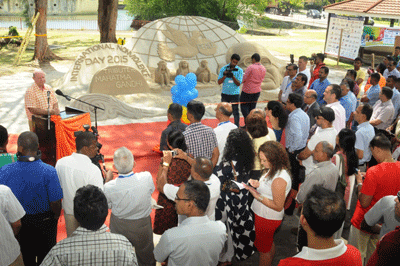 “It is with a lot of pride that we recognise the effort of the organising committee, the tireless dedication of the members and we thank you all. We recognise you as strong partners of our culture, the people who make things happen by working closely with the Indian high commissioner and the department of culture,” Mr St Ange said.

Mr Panda congratulated Mr Pattnaik whom he described as an international figure who always conveys a message through his sculptures adding that the one in the playground has peace as message.

“On the international non-violence day is a great beginning to the Seychelles-India Day activities which set the tone for the next four days,” Mr Panda said.

Following the cutting of the ribbon by all the ministers and Mr Pattnaik, the latter signed copies of a book of his sculptures which he presented to the dignitaries.

Then ministers St Ange and Meriton, Mr Panda, the chairperson of the organising committee Ramu Pillay, the Indian business community as well as other guests proceeded in the early afternoon to witness the unveiling of the Wall of History at the National Cultural Centre.

The marble wall comprise a list of Seychellois people of Indian origin from the very first settlers of 1770 and the first traders followed by others who have lived and contributed towards building the nation and the socio-economic growth of Seychelles.

Five Indians named Chary, Moutou, Menate, Corinthe and Domagne were among the first settlers to arrive here in August 1770.

Among other names on the list are Indian traders, businessmen and families like Pranlal Jivan, Meghjee Kalyanji, Dhanjee Hamir, the Chetty, Naidoo, Adam Moosa and Temooljee families.

“The Indian community is one of those communities who have worked hard to build Seychelles and we are happy to have started to show the names of those people,” said Minister St Ange who expressed great appreciation for their enormous contributions.