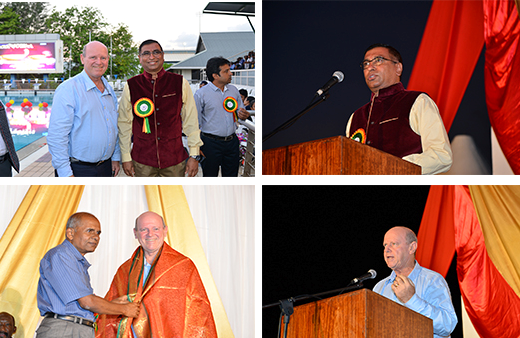 A large crowd of Indians and Seychellois alike gathered at the Seychelles swimming pool complex at Roche Caiman last Saturday evening for the annual Diwali, the Festival of Light.
The Diwali Festival is a celebration of the victory of light over darkness, knowledge over ignorance, good over evil, and hope over despair.
Present at the event were Vice-President Danny Faure, Designated Minister Vincent Meriton, acting Chief Justice Durai Karunakaran, Minister for Tourism and Culture Alain St.Ange, leader of the opposition in the National Assembly David Pierre, Indian high commission to Seychelles Sanjay Kumar Panda, Bishop of the Catholic Diocese Denis Wiehe and from the Anglican Diocese, Bishop James Wong.
Members of the Hindu Council of Seychelles and Seychelles Inter-Faith Council were also present for the ceremony.
The lighting of the lamp was a symbolic gesture to start the event with, which followed by words of welcome from the council’s chairperson Pravin Darad.
This was followed by the honouring of Vice-President Faure, the ministers, Justice Karunakaran, Mr Pierre, HC Panda and members of the two councils, by giving them a silk shawl and a memento.
Addressing those present, HC Panda said Diwali is the mother of all celebrations, as it is a symbolic event which marks the triumph of good over darkness.
He commended the efforts of the Hindu Council for putting together such an auspicious event.
Minister Meriton conveyed the warm wishes and prosperity to the Hindu community in Seychelles from the President of the Republic James Michel.
In the message, President Michel said the Diwali Festival gives us the chance to celebrate our diversity, unity and fraternity.
Also speaking was Minister Alain St.Ange who said the festival falls in the cultural attachment of the diversity of what makes Seychelles what it is today.
He added that the presence of the government officials and members of the Inter-Faith Council signifies the spirit of togetherness that the government is putting at the forefront to ensure that the islands unity through diversity grows from strength to strength.
Minister St.Ange congratulated the committee for being able to bring on stage for such an festive occasion a sense of solidarity with people of various religious and political affiliations in the spirit of national unity.
“Let us all keep working together to grow this diversity of culture and the togetherness among our people” Minister St.Ange added.
Words of congratulations also went to KK Patel and Narasimhan Ramani, who have received the Hind Rattan Award 2015 given by the Non-Resident Indians Welfare Society of India.
The award recognises the social work and contribution towards the community of non-resident Indians across the globe. Mr Pravin Darad also used the festival to announce that Alain St.Ange, the Seychelles Minister responsible for Tourism and Culture had been invited to be the Guest of Honour at the Hind Rattan Award Ceremony that will coincide with the Indian National Day 2015.
Messages of well wishes from the Vatican, Baha’i Faith and the Anglican Church were read during the ceremony.
The evening ended with a vibrant cultural show from various groups and fireworks lighting up the sky.

2014-10-23
Georges
Previous: Vanilla Islands speaks out on the Creole Festival of Seychelles
Next: The Seychelles’ Festival Kreol blossoms again as program is detailed on island’s main radio by Culture Minister and his Principal Secretary