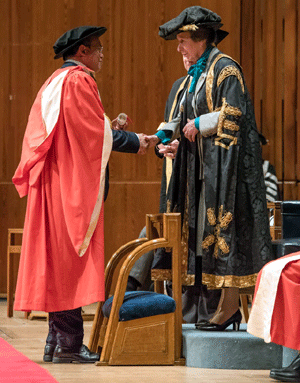 Seychellois Rolph Payet, a globally recognized figure on small island states issues including climate change, has received an honorary doctorate degree from the University of London.

The ceremony held at the Barbican Centre in London, also saw the graduation of hundreds of students from over 80 countries who have followed University of London International Programmes, including a group from the Seychelles.

Payet says he feels honoured that his contribution to his homeland, the African region and globally have once again been recognised.

“I feel this is award is in recognition to the work I am doing and also to what I have achieved before,” said Payet in an emailed response to SNA.

The award is bestowed to a person who is outstanding in his or her field, commands international or national recognition and has given exceptional service to the university.

Payet is a pioneer of environment development, climate change in his country and is an expert on international policy.

Mary Stiasny Pro-Vice-Chancellor of the university said “academic, environmental scientist, diplomat, politician and leader – locally, regionally and on the world stage, Dr. Rolph Payet is an inspiration to us all.’

In 2007, Payet was jointly awarded the Nobel Peace Prize for the impact of the Intergovernmental Panel on Climate Change’s (IPCC). Two years later he was instrumental in founding the University of Seychelles (UniSey) and became its first vice-chancellor. 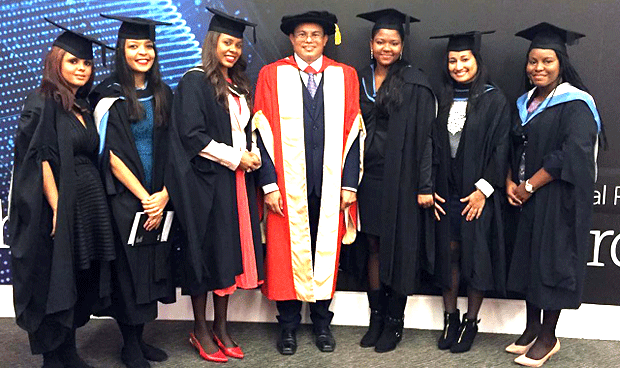 Rolph Payet (centre) pictured with a group of Seychellois students who also received their degrees after completing their studies as part of the University of London’s International programme, offered at the University of Seychelles. Also pictured is the Chief Executive of the Seychelles Tourism Board who received her Masters degree in Finance after following her course long distance. (Sherin Naiken) Photo License: CC-BY

“Last year, there were seven students; this year 15. His dream of building a platform for training the environmental scientists of the future is being realised,” she added.

Formerly, the minister of environment and energy of the Seychelles’ archipelago in the western Indian Ocean, Payet was appointed the Executive Secretary of UN’s Basel, Rotterdam and Stockholm Convention in October 2014.